Recently, Matt and I were watching an older movie that is about some college kids traveling across Europe.  Of course everything that could possibly go wrong happens.  They end up losing all their money, except a few coins, and they are stuck in Bratislava.  However, the few coins they had were worth like thousands of dollars there because the economy was down!  Matt and I were laughing because the night we were watching it, he was booking our accommodations for Bratislava and everything seemed so cheap!  (Okay, but not THAT cheap!) lol!

We took the train from Vienna to Bratislava and it was only an hour away.  We didn't plan a lot of time, only a day, but we knew we wanted to see it and experience the culture!  When we arrived at the station, it was the first and only time on the trip that I felt a little on edge.  Not worried anything was going to happen, but just more cautious with my belongings and everything.  The train station was a little run down, but apparently they have plans to build a whole new station in the next few years, which would be amazing because it was super busy when we were in there!!! 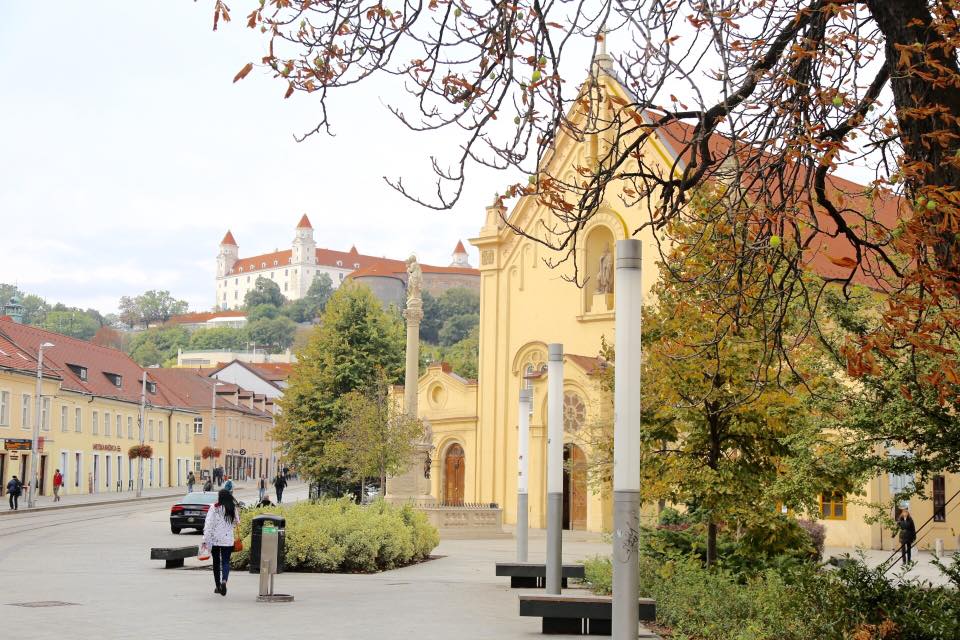 ACCOMMODATIONS
We got a little lost trying to find our hotel, LOFT Hotel, which we booked close to the train station, but it was a little confusing when we walked out.  LOFT hotel was gorgeous and I'm so glad Matt booked this one!  It was decorated in a rustic theme with bear skins and exposed wood; but everything was brand new and beautiful.  We loved our room, especially because the entrance way was closed off to the main bedroom so we could put the boys to sleep and hang out in the entrance room without disturbing the boys!  The mini bar in the fridge was complimentary (beer, sparkling water, soda, etc), in addition to chips and coffee (which Dylan and Matt were super excited about!)  Also, your first two glasses of wine were complimentary at the hotel bar.  It was perfect for a one night stop, although about a mile walk into the old town, which is really what you would want to do if you visit. 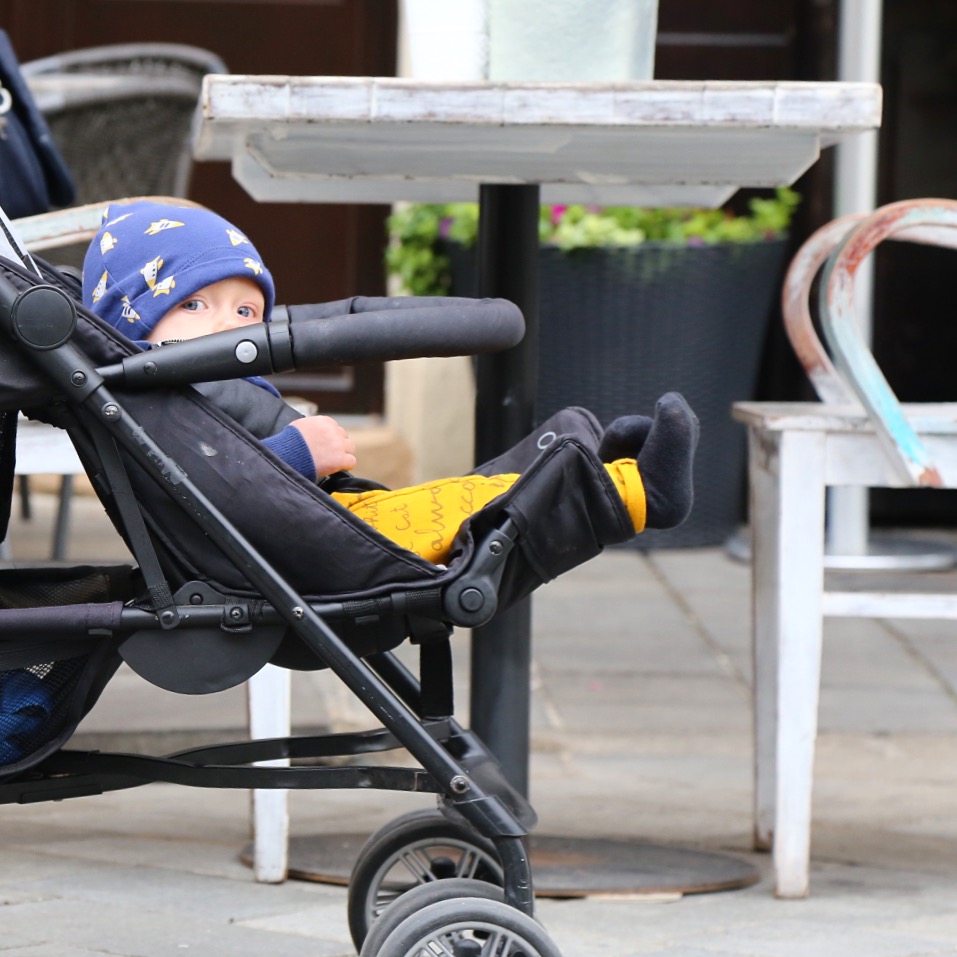 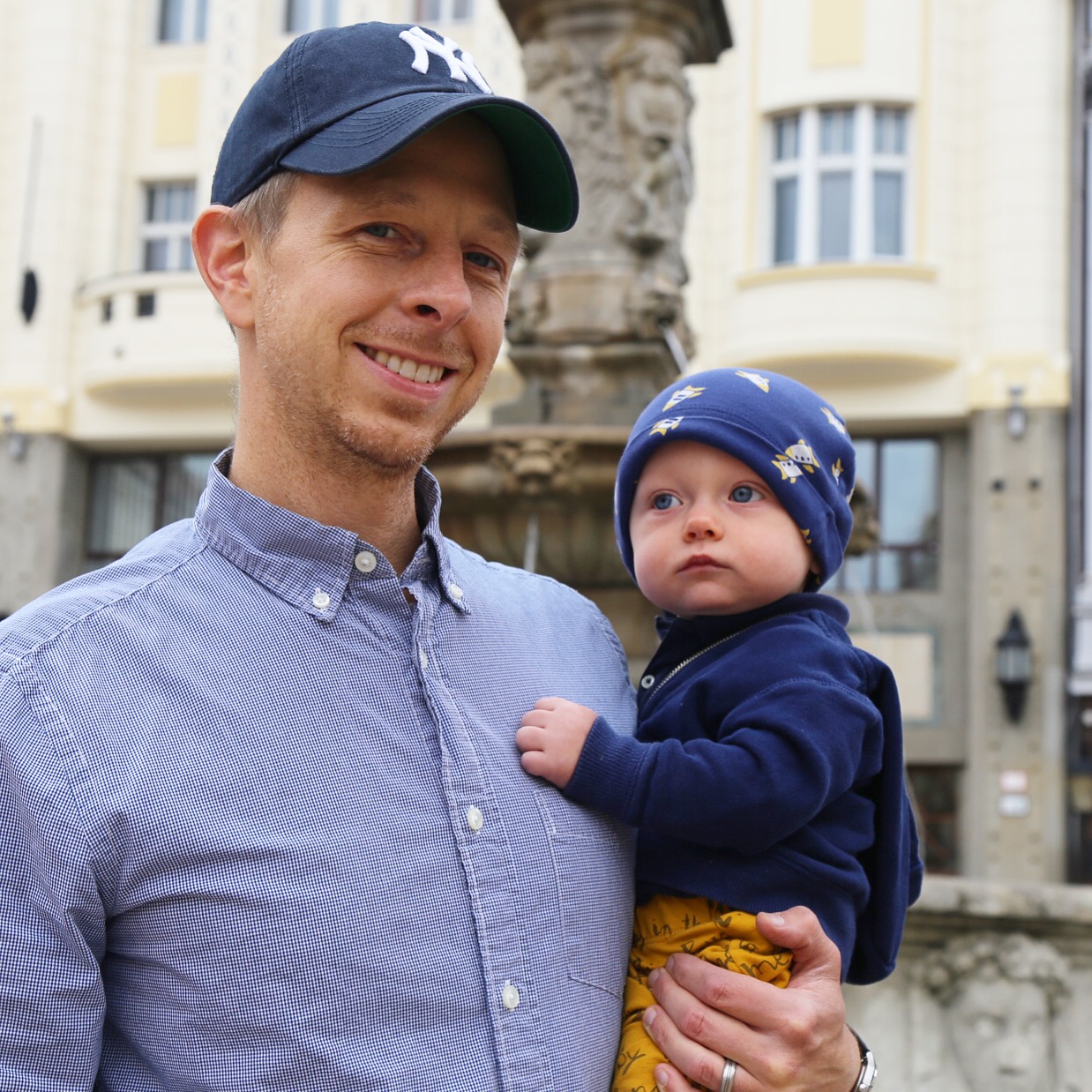 Our hotel was outside of the old town, which we purposely picked because we really wanted to be close to the train station… it can get annoying carrying your luggage and children around for miles when you get off the train. 😉  From the train station, our hotel was a ten minute walk and then another 10 minutes into the old city.  The old city is beautiful and quaint, sitting below a castle on a hill.  We loved walking around the pedestrian streets, peaking into little shops and through open markets.  We love pedestrian streets for toddlers because they can walk freely without the worry of cars, but it’s definitely more difficult going into shops with small children.  I’ve started a rule when we go into stores where Dylan has to hold his hands behind his back so that he doesn’t just go ahead and touch everything.  Then, if he finds a stuffed animal or plastic toy, he can ask for permission to touch that item.  I try to find something in the store that he can touch or else he would go crazy! 😉  (Scroll down to see my video of Dylan in one of the shops!)⬇

Since there were no major historical buildings or tours that we really wanted to see in Bratislava, we tried to really let the day focus on Dylan and Christopher.  So we stopped at a lot of playgrounds and ice cream shops and had so much fun!  I love watching Dylan trying to talk and play with the little children who only speak Slovak and see them still communicating and playing together.  I’m pretty sure when I was three, I just assumed that everyone was the same as me and only spoke English. 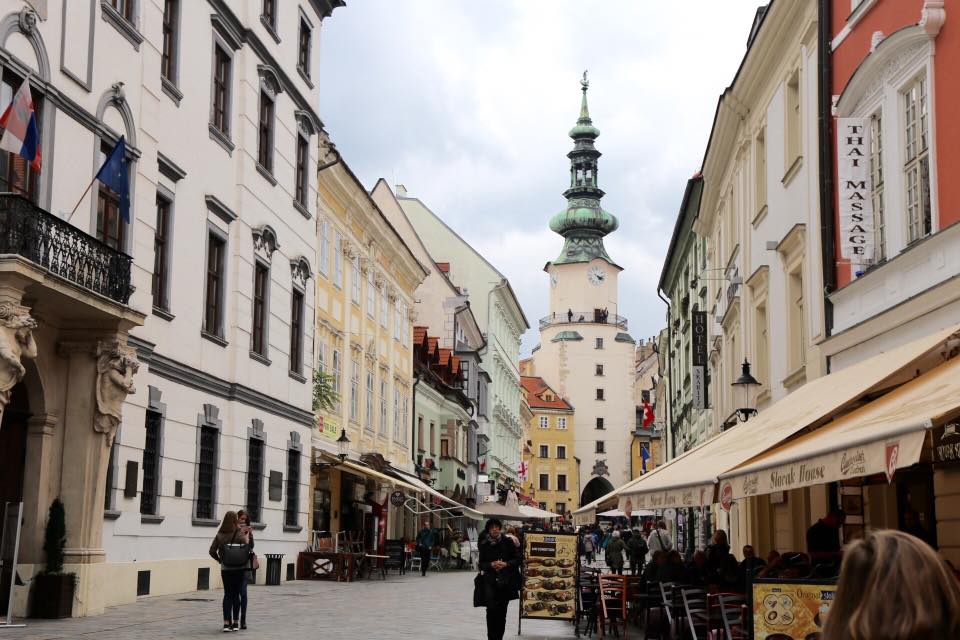 Right outside the old city, you find the Danube River and the "UFO" bridge and tower, which literally looks like a UFO!  We got to see it lit up at night and it was so cool.  Apparently, people make fun of it because their communist government built it and everyone thought it looked so silly and out of place.  Then we walked about a mile or so to their newly built shopping center.  It was cold and rainy so Matt suggested it because it would be nice to warm up.  I don't know what Matt was expecting, but of course it was basically like a brand new mall!  Matt was crawling out of his skin in there (and I was quickly trying to look inside all of my favorite stores! lol)  We went to the bathroom, stopped at Starbucks and felt SUPER American, and then left to head back for the old city so we could act like tourists again. Haha! 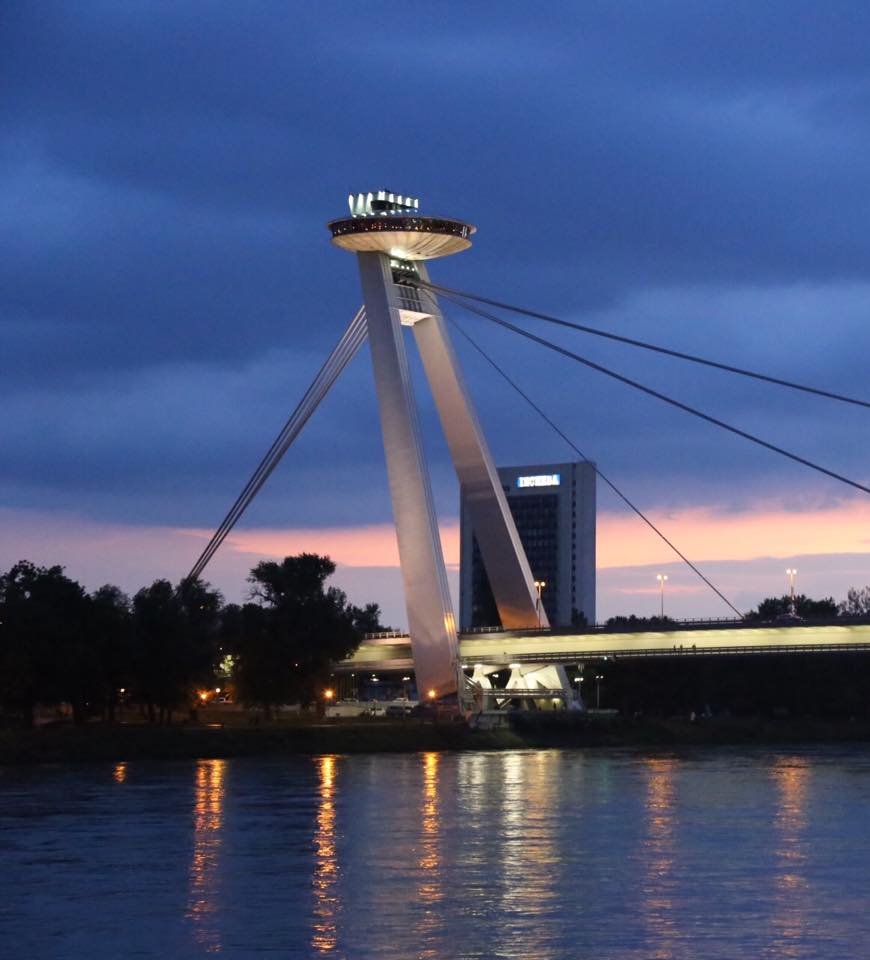 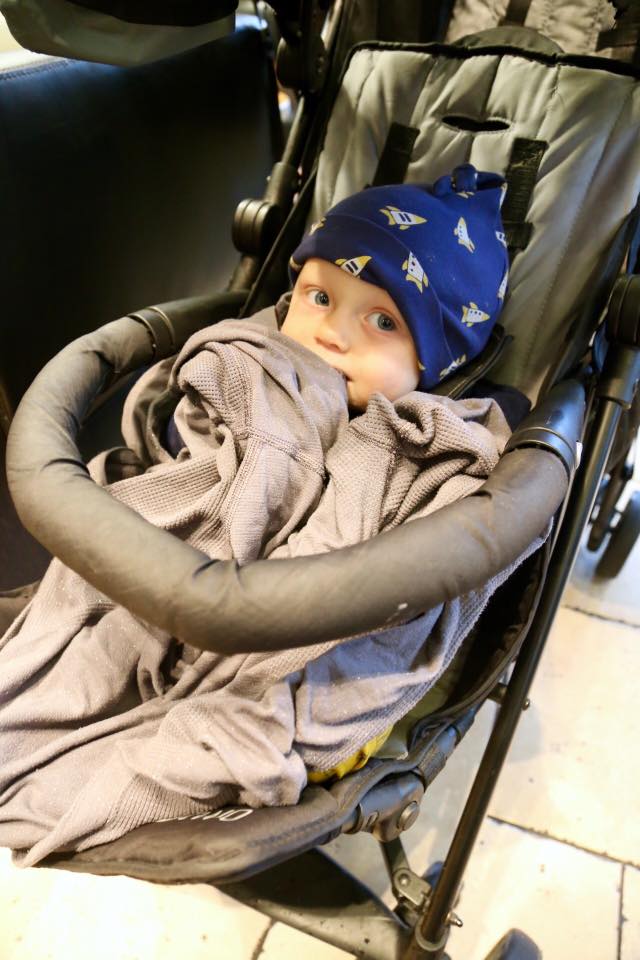 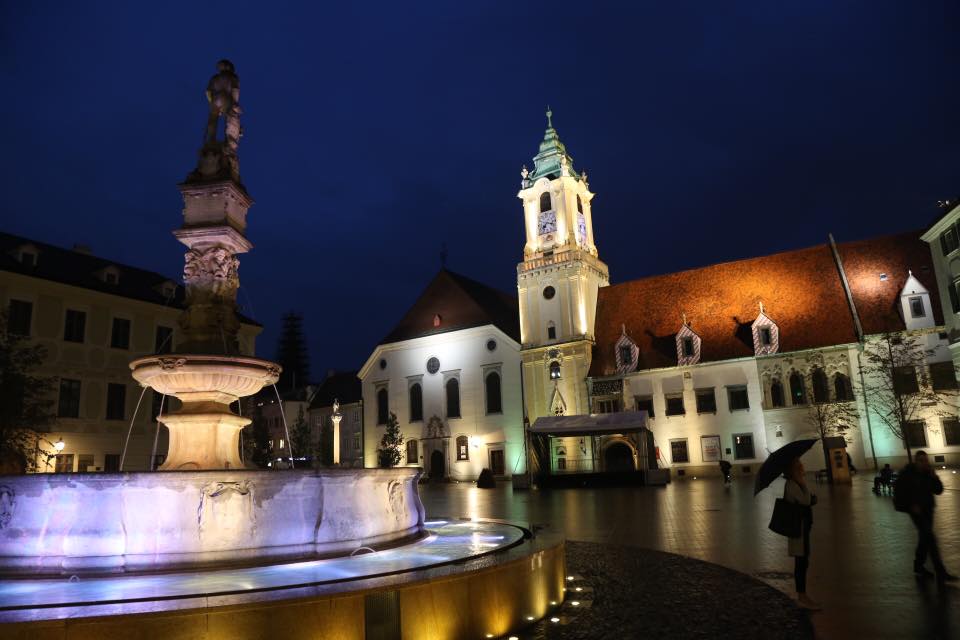 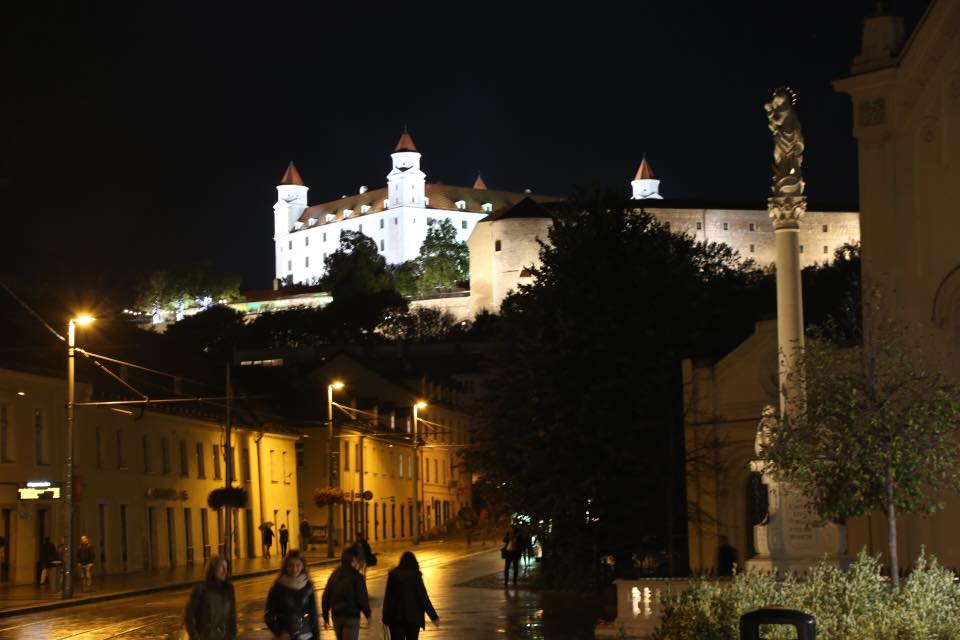 We discovered the best restuarant right in the heart of the old city called Enjoy Coffee.  We actually ate there twice!  The first time, the boys were sleeping, so we had a nice long lunch together.  Everything was so fresh and healthy and I was looking at their breakfast menu and loved it, so we went back the next morning for breakfast.  Then we discovered they had a whole kid section with the best toys ever for the kids to play!  In fact, the boys had so much fun playing, that neither one of them really ate their breakfast because they didn't want to leave all the cool toys!  It was too bad, because they had a great kids menu with all these healthy baby smoothies and fruit!! 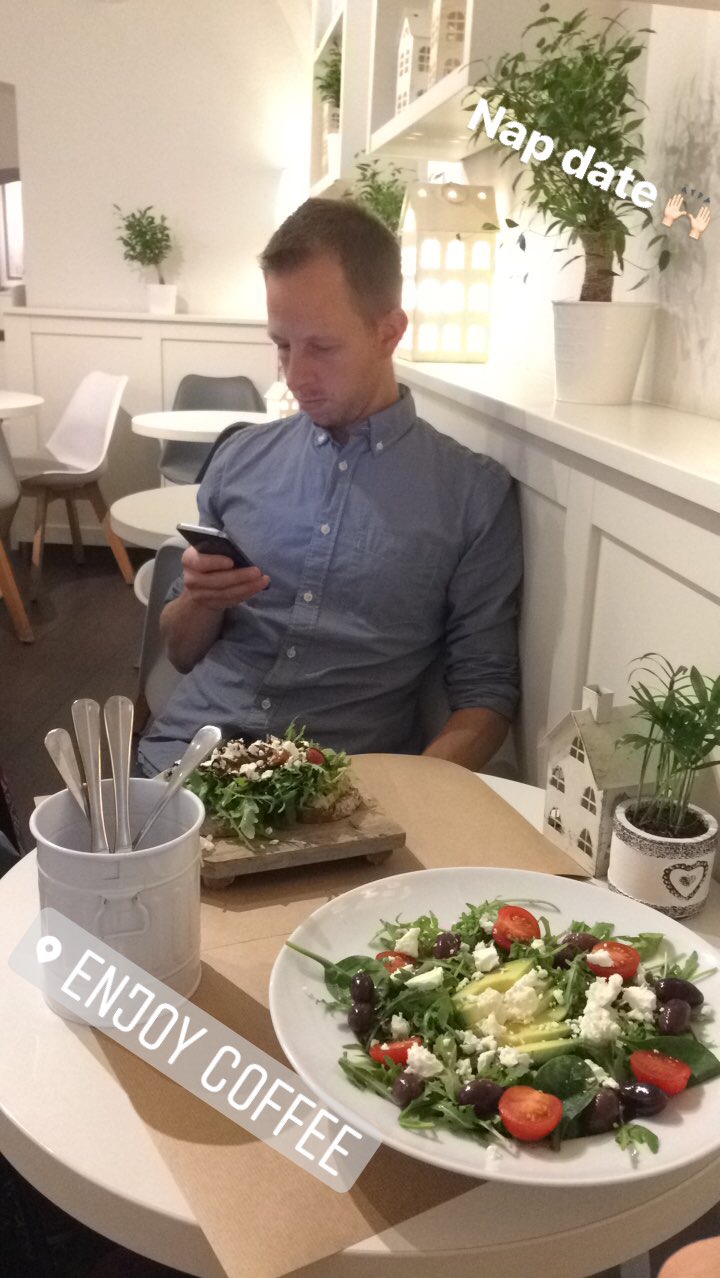 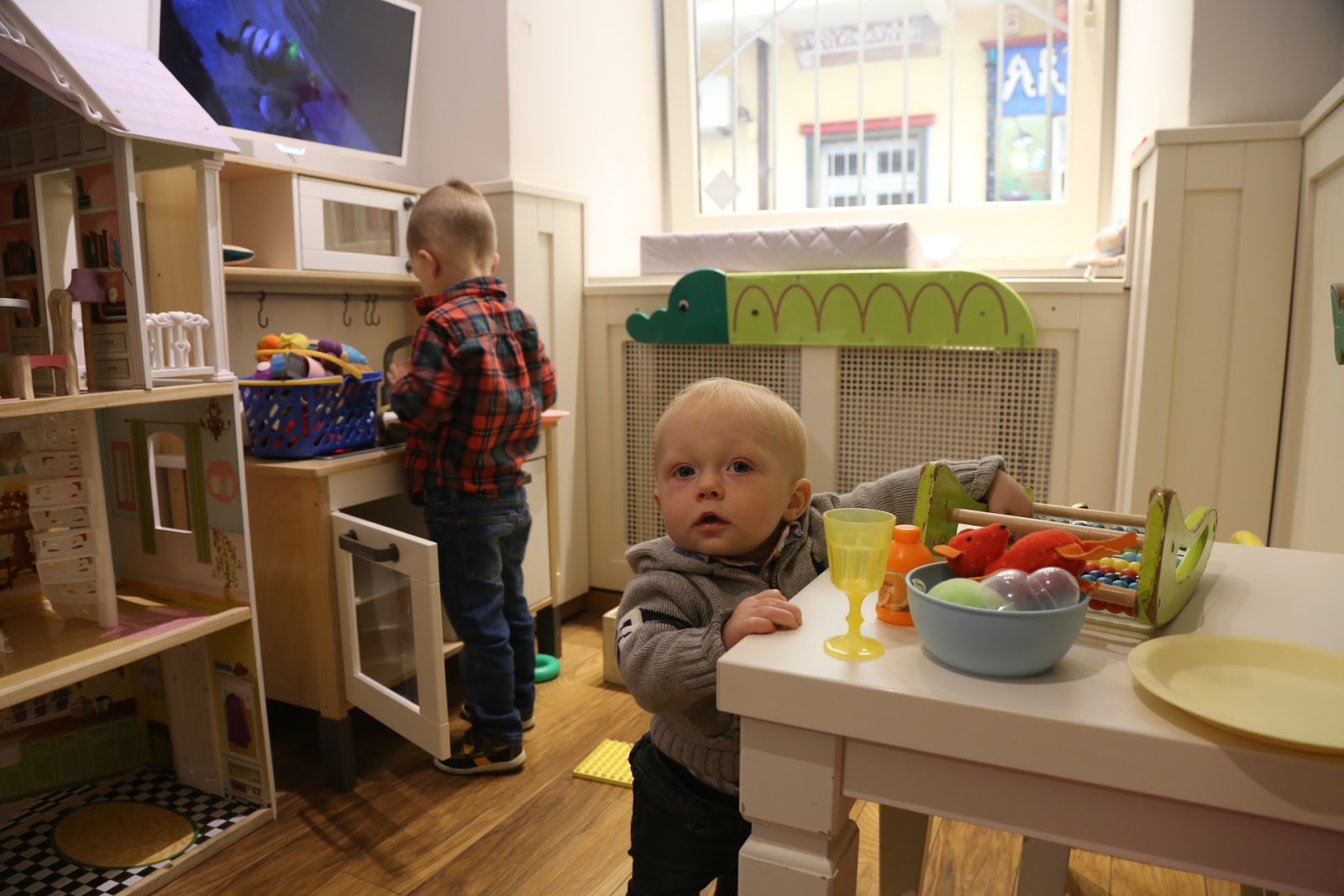 Overall, we had a great time in Bratislava and I'm glad we went!  You probably don't need more than a day there, so I would definitely not recommend any more time than that! :)

*Check our our videos ⇓

Details:
Places: Bratislava, Slovakia
When: September 2017
Duration: 2 days (one night)
Weather: Cold and wet 50-60 degrees Fahrenheit
Transportation:
Train: to get there from Vienna, we walked everywhere in the city
Accommodations:
LOFT Hotel Bratislava (Matt's Trip Adviser Review)
Location is the top of the list if you ask me. I picked this hotel because it was half way between the train station and the city center. It worked out pretty well for a quick one night trip.
It's a newer hotel, so things were nice and clean, and decorated very well. The lobby, bar and restaurant were very sharp. Our room was very typical, maybe even a bit cookie cutter though.
They offered some interesting extras: a free minibar (complete with two beers) and vouchers for free drinks at the bar. We enjoyed taking advantage of this, and probably wouldn't have normally.
We didn't purchase a breakfast, we decided to walk into the city for that instead. They offered a buffet, and it looked pretty decent.
The room had a view of a park behind the building, but it wasn't anything special. Some of the staff was very friendly, others not as much... it might have been a cultural thing though.
All in all, it was a good stay in a city with limited options.
Restaurants: Enjoy Coffee