Ever since Matt first watched Indiana Jones and the Last Crusade, he has dreamed of going to Petra to see the Treasury as shown in that famous final scene of the movie.  As one of the new seven wonders of the world, Petra is one of those places that we will always remember and stands out to us as one of the most amazing places we have visited. 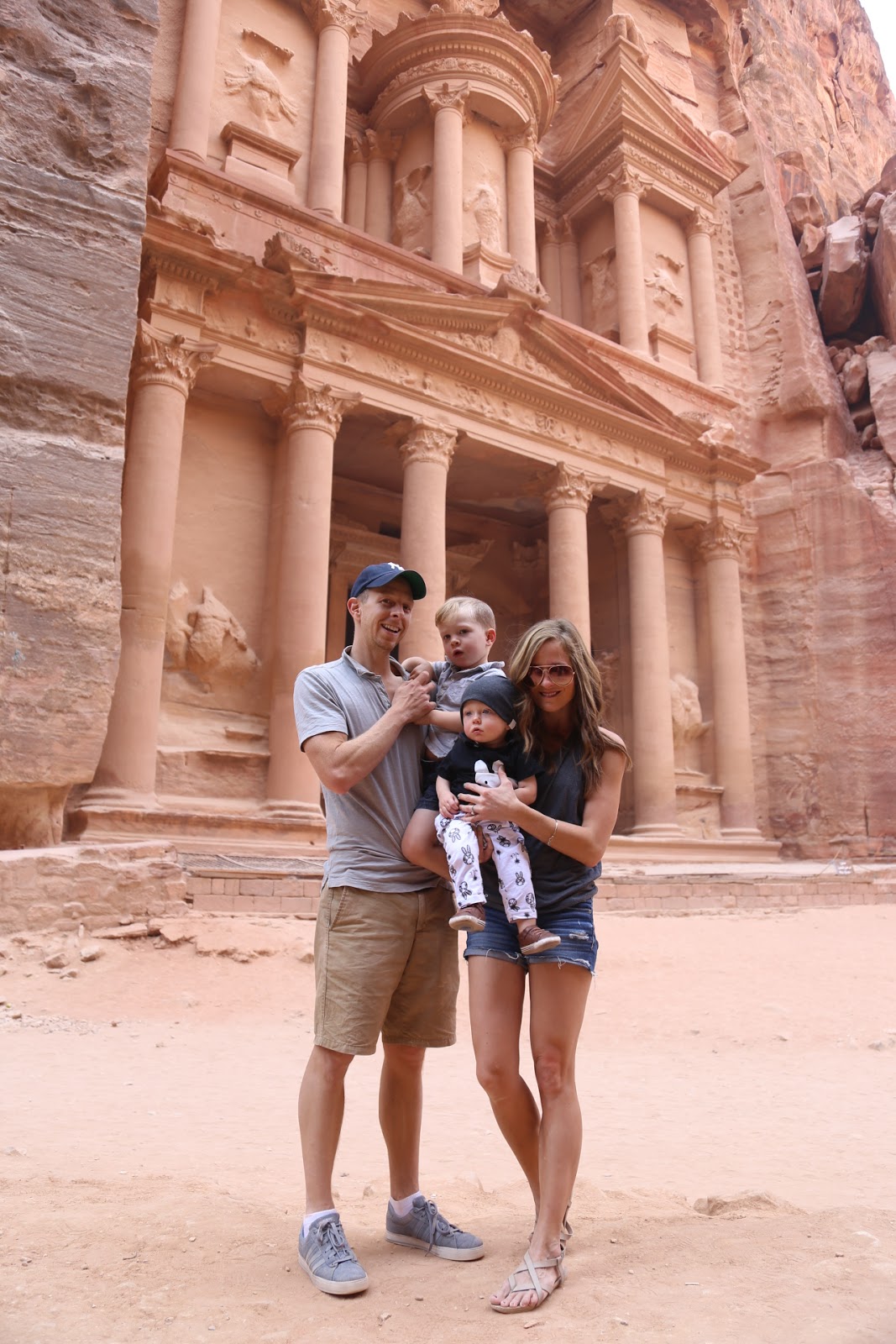 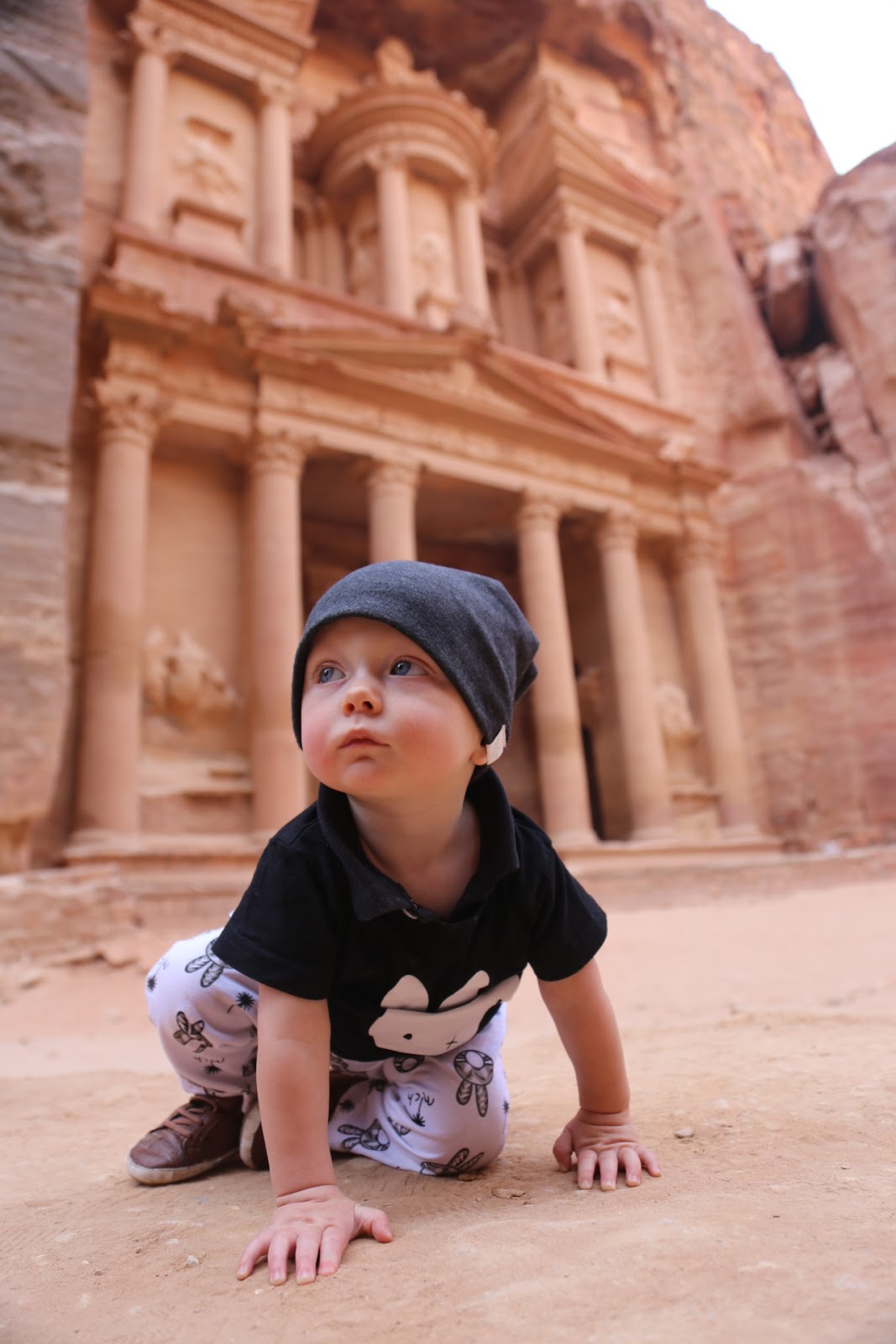 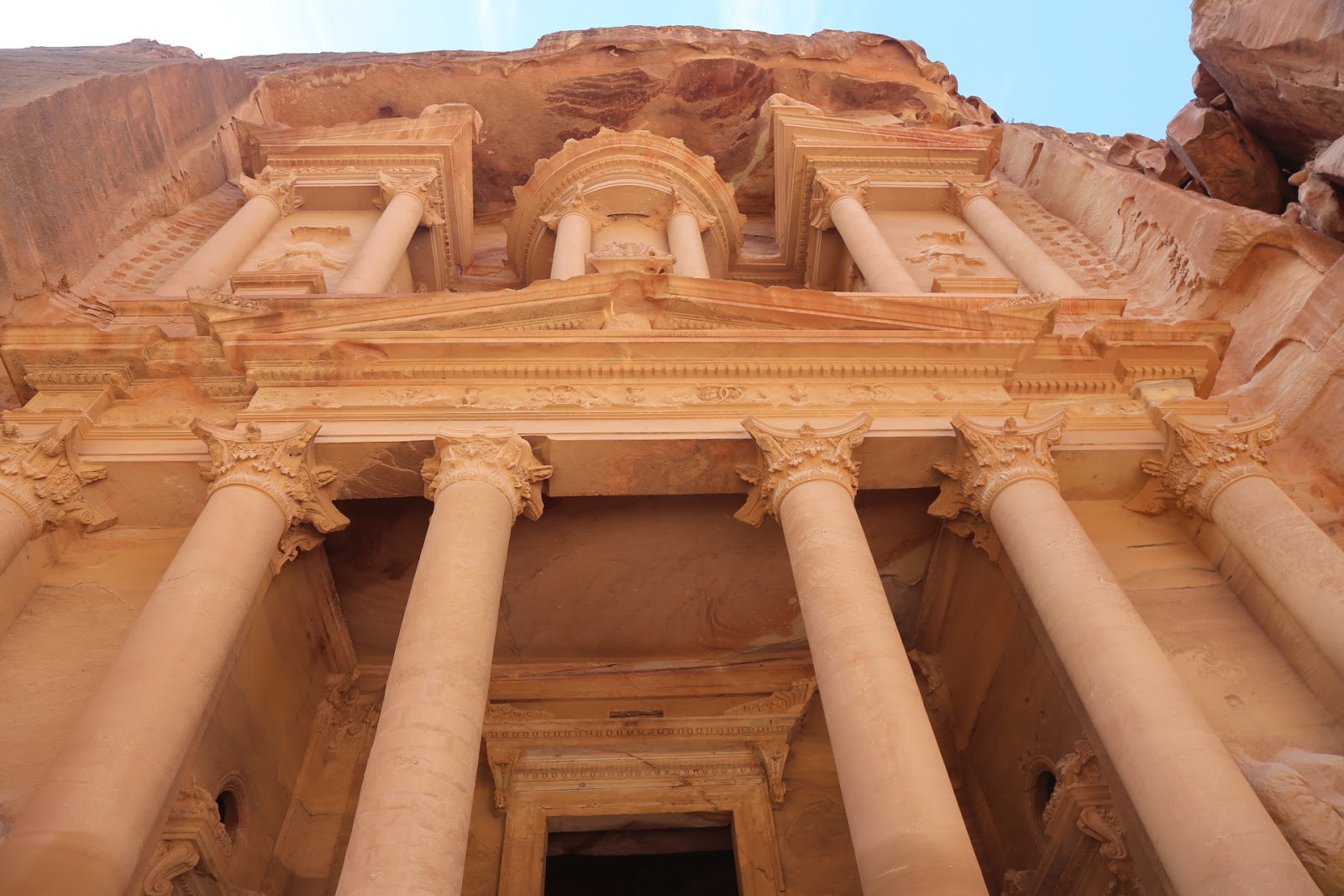 Getting There:
This was by far one of the most difficult parts of the trip- the logistics were insane!  Because Jordan and Israel aren't on friendly terms, we couldn't just rent a car and drive across the border.  So, instead, we had to rent a car in Jerusalem, drive four hours to the town at the border of Israel and Jordan, return the rental car, take a taxi to the border, WALK across the border line, take another taxi into Aqaba, the town in Jordan, and rent another car to drive another 2 hours to Petra.  It took ALL day and I hated that by the time we got into Jordan it was dark out and we had to drive in the dark to Petra.  The driving was scaaary, it didn't seem like anyone followed road rules and we couldn't see anything because there were no street lights.  Not to mention, I was already pretty shook up from the whole boarder crossing experience, which was.... an experience.  We looked into all different options; flying into Jordan (which would have been very pricey) or taking a tour, but this seemed to make the most sense.   We didn't run into any problems doing everything ourselves, but I definitely felt a little on edge crossing the border alone with our two small kids and we are thankful nothing did go wrong!  If you were going there next week I would probably suggest just taking a tour to get into to the country. :) 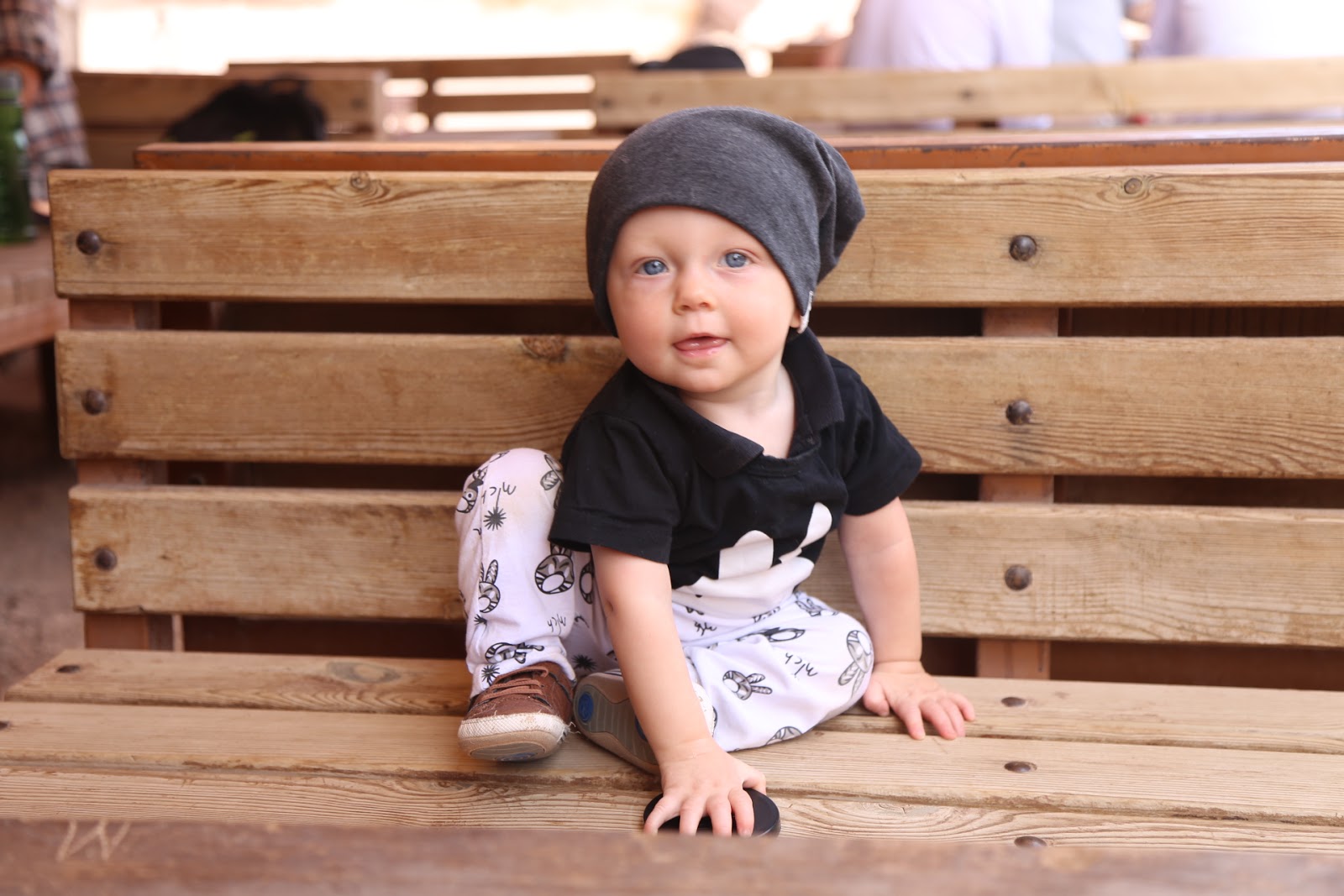 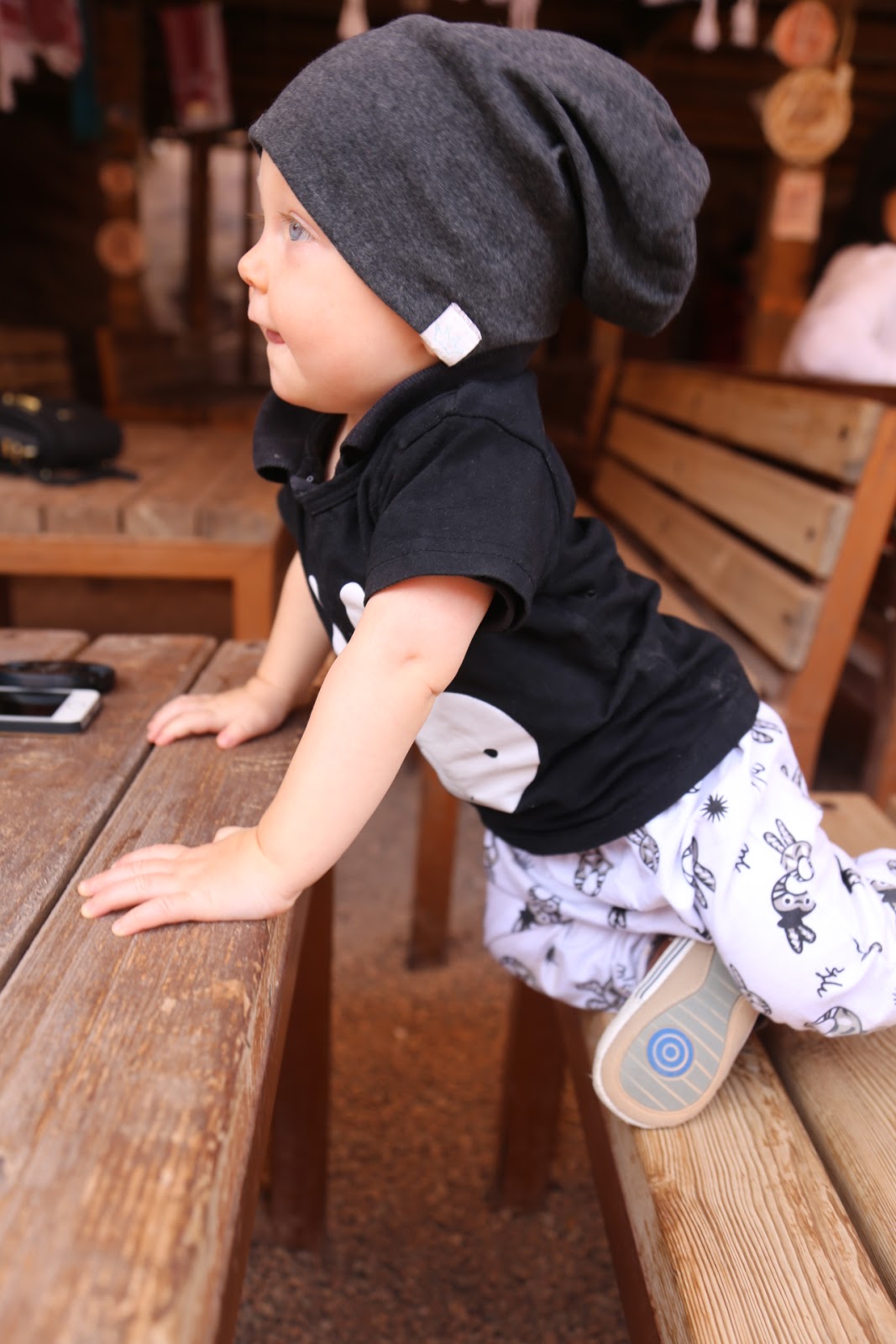 Costs:
After quite a bit of research, Matt discovered that we could purchase "Jordan passes" ahead of time for about $100 per person (the kids where free), which covers the price of the visa to get into the country, entrance passes to Petra, and a bunch of other sites (however we only used it for Petra).  However, to the get the pass, you had to stay a minimum of three nights.  So we planned to spend one night in Petra and two more nights at the beach in Aqaba (stay tuned for a post on Aqaba soon) :) 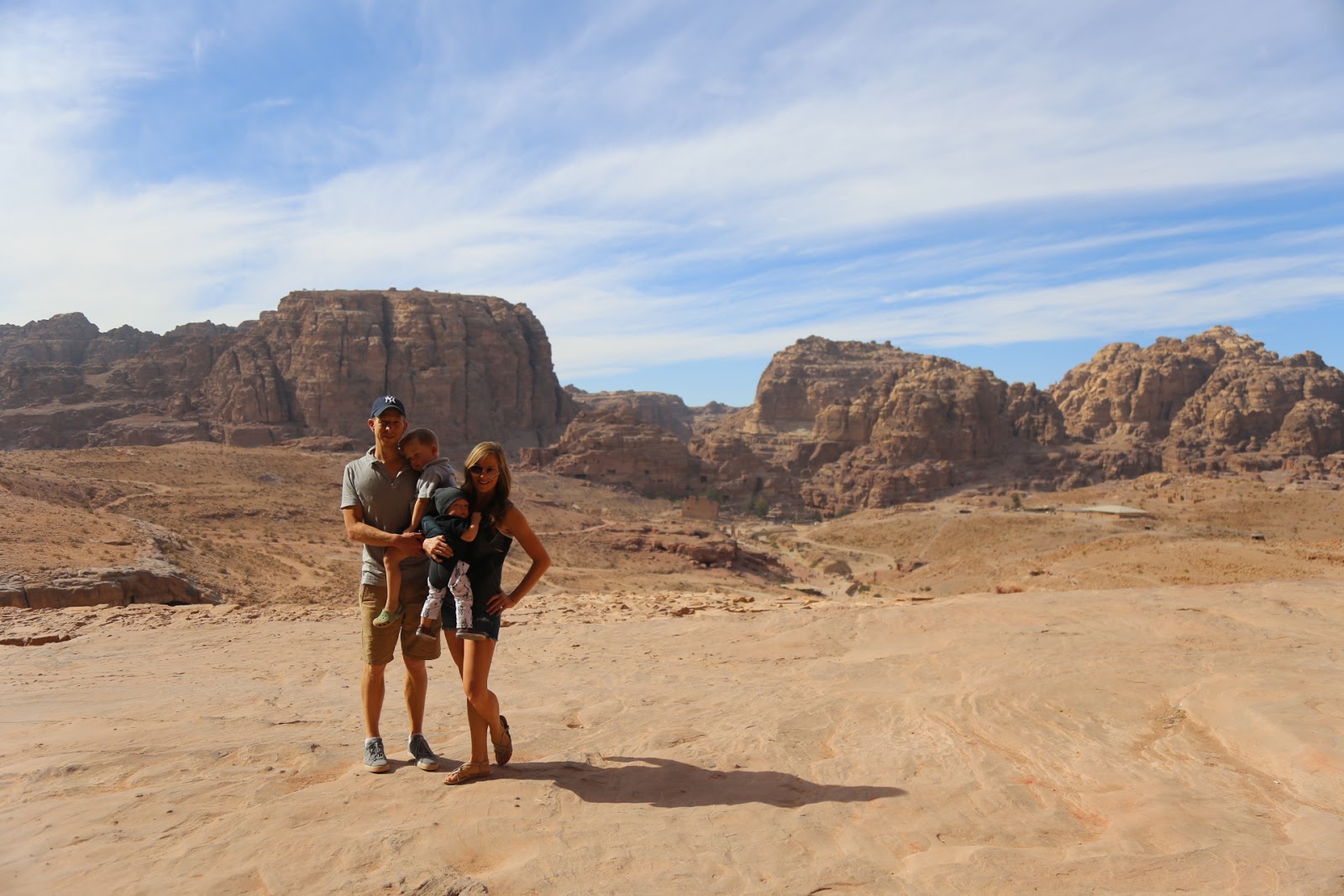 Hotel:
We LOVED our hotel, Petra Guest House, in Petra!  When we arrived that evening, we were met at the gate by a security guard who checked our reservations and inspected the car.  He even had a mirror to look under the vehicle.  We parked right in their lot and I really appreciated how secure everything was so that we didn't have to worry about anyone trying to get into our rental car.  In the hotel, all our bags were checked through a metal detector by a security guard at the door.   At the front desk, we were welcomed with yummy drinks and escorted to our spacious room; perfect for a good night's sleep before our big day.  The next morning, we woke up and quick went to breakfast, which had an amazing assortment of pastries, hot and cold options and made to order eggs, waffles, etc.  Then we were off to explore old Petra! :)

Visiting Petra
Matt purposely booked Petra Guest House because it was right next to the entrance of Petra, so we could literally walk outside the hotel gate and into Petra grounds.  Of course, we were immediately surrounded by locals who wanted us to take on their horse buggies and buy trinkets; we declined and enjoyed the gorgeous sun and walk between the high cliffs (the Siq) into the Treasury.  It was about .75 mile (1.2 km) walk, which was quite enjoyable.  We read from another blogger family that it was definitely stroller accessible, so we we brought our 3D Summer Infant double stroller, and I'm so glad we did because, of course, toward the end of the walk, Dylan was tired of walking and wanted to sit down.  I know some parents travel wearing their kids all day, but that is SO not enjoyable to me and I really like having a stroller with us so that we can put extra snacks, diapers, sunscreen, water, etc. underneath and not carry that in addition to a 20 lb baby.  I did pack my baby bjorn, which I ended up using for a small part of the day when we were going to climb a bunch of stairs, but besides that, you would be fine using the stroller. 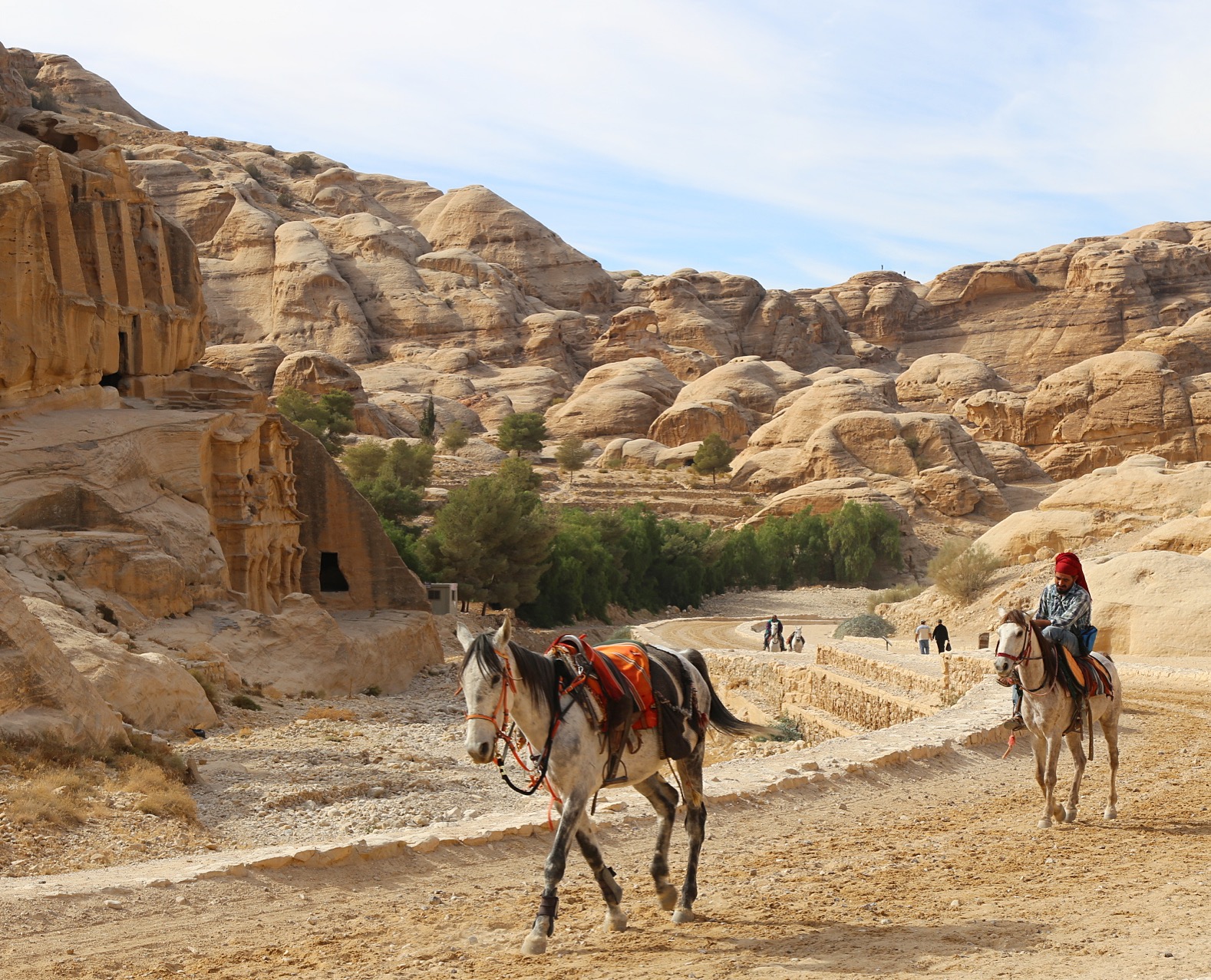 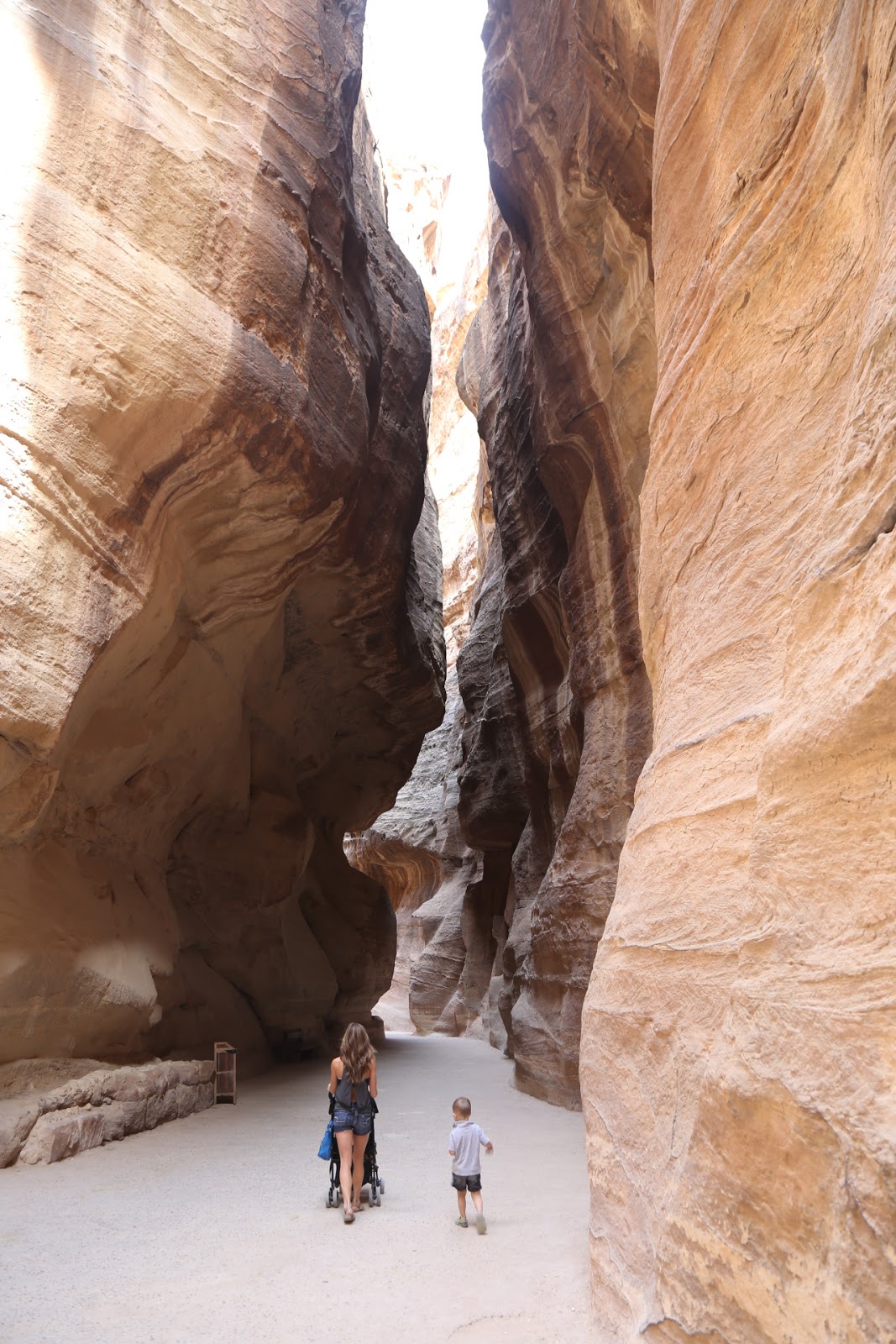 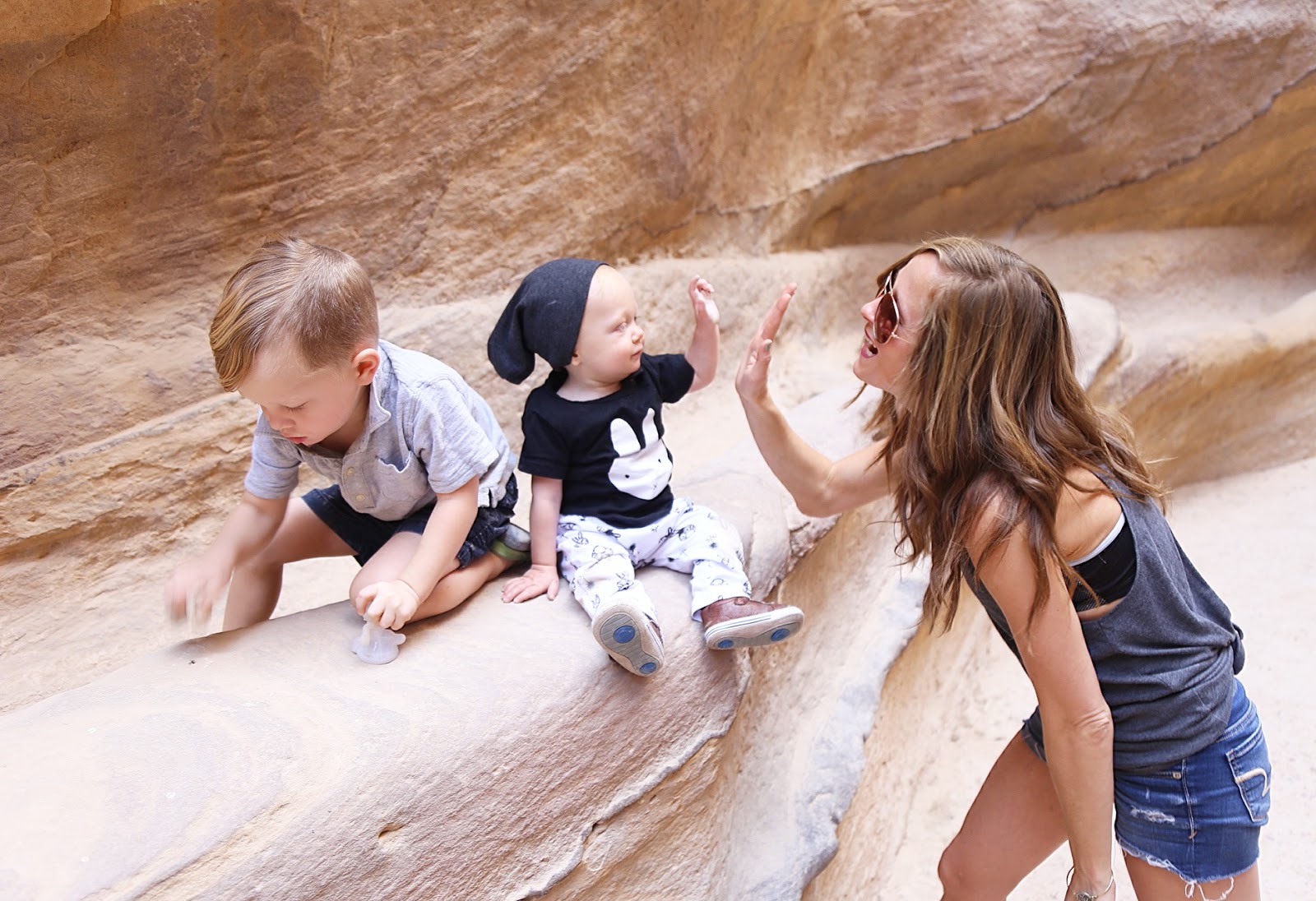 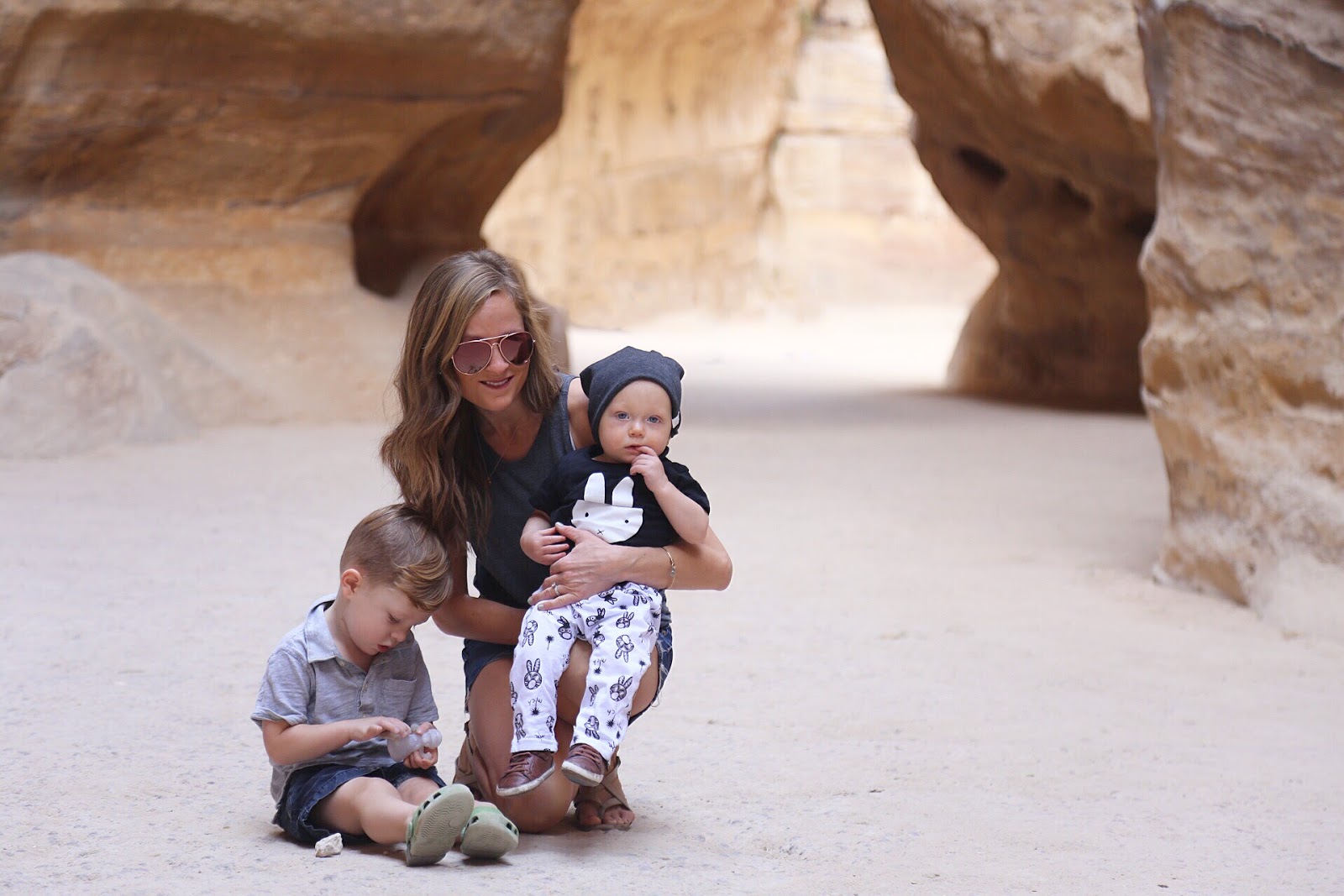 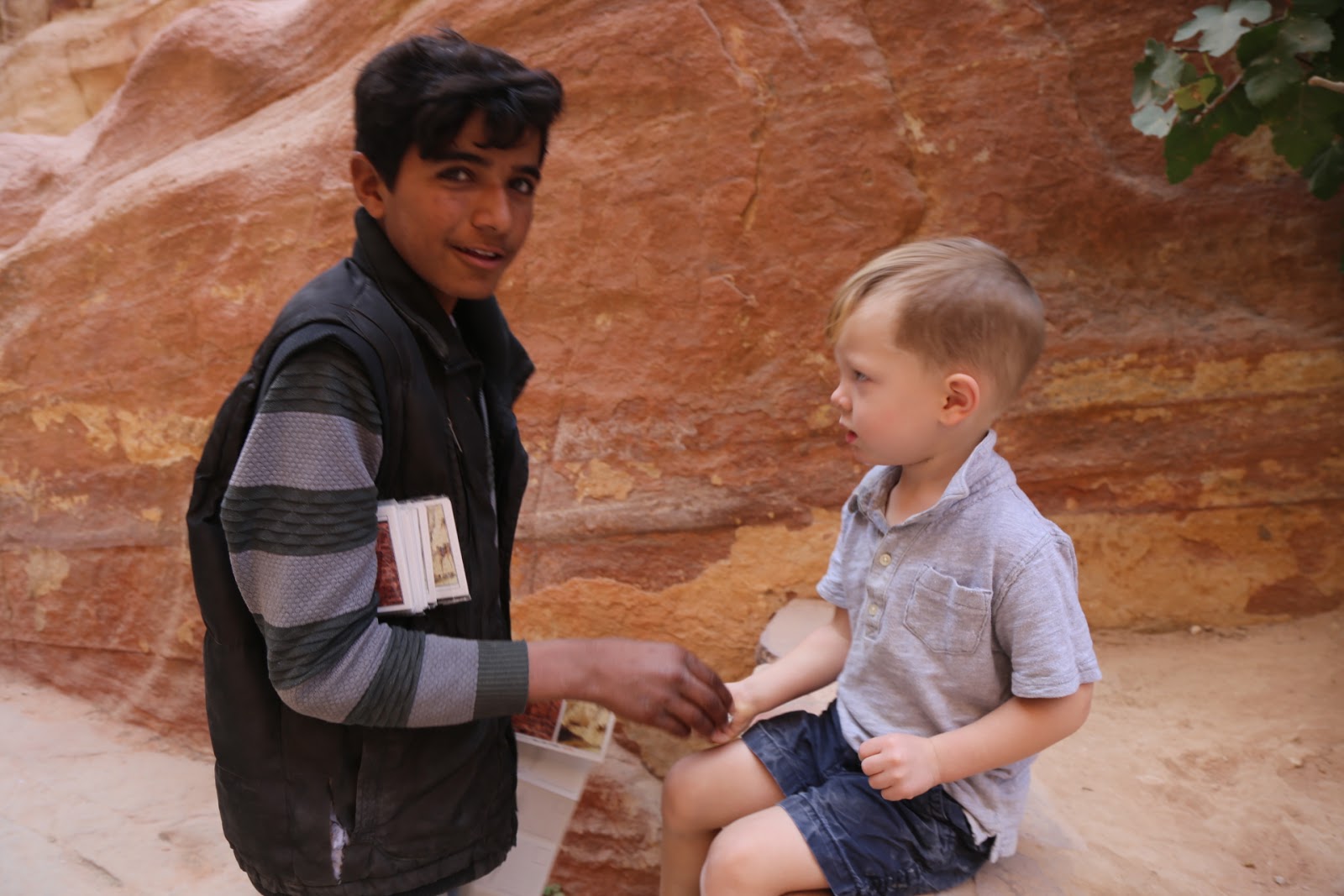 Our first glimpse of the Treasury, was AMAZING!  It is one of those moments we'll never forget (well, maybe Christopher will... and Dylan, poor kids). ;-)  I remember the first time we saw the Mona Lisa in Paris and thinking that it was SO much smaller than I was expecting it to be, so I was wondering what Petra would really be like in person.  But it was even better and bigger than I expected!!  We took a bunch of pictures and of course, after a lot of pressure by more locals, we were suckered into a camel ride around the area for $5, which was really just to get a cool picture. ;-)  Dylan was SO scared to ride the camel, but I promised him that he wouldn't regret it, and he still talks about it a whole month later, so I'm glad we convinced him! 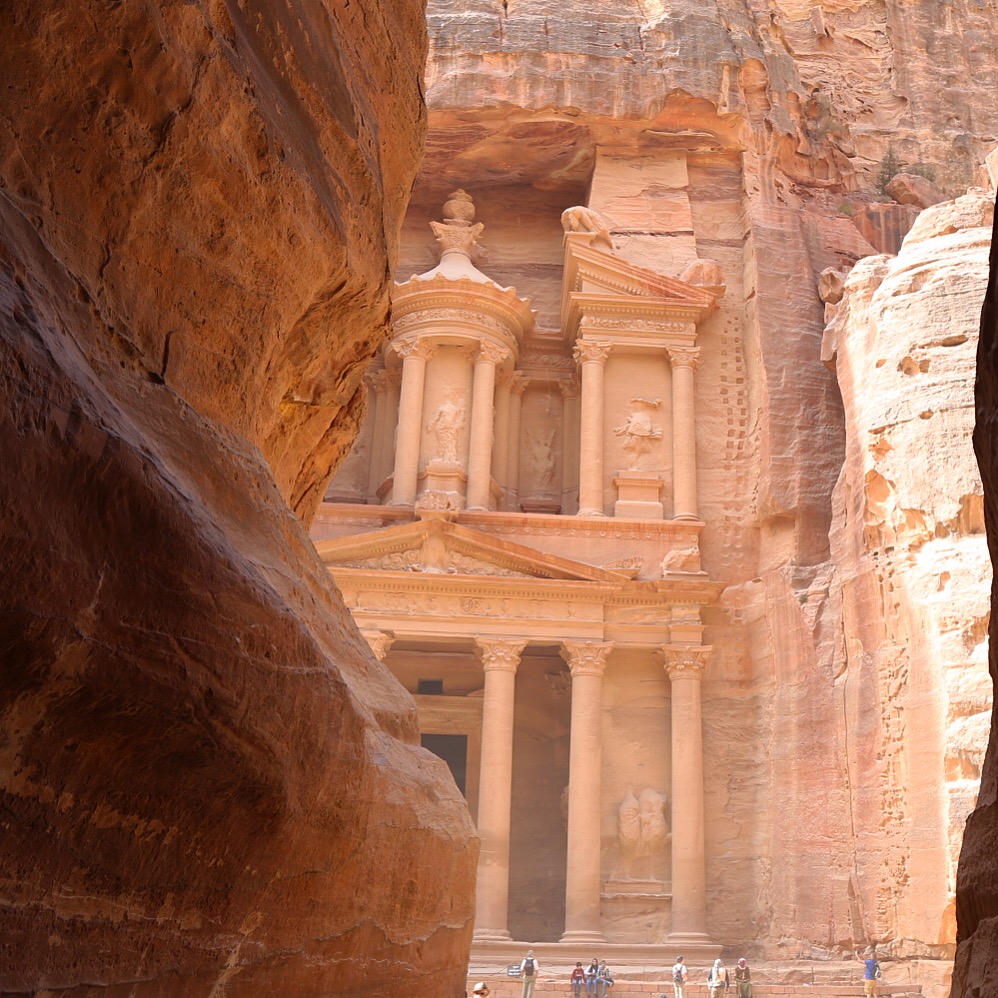 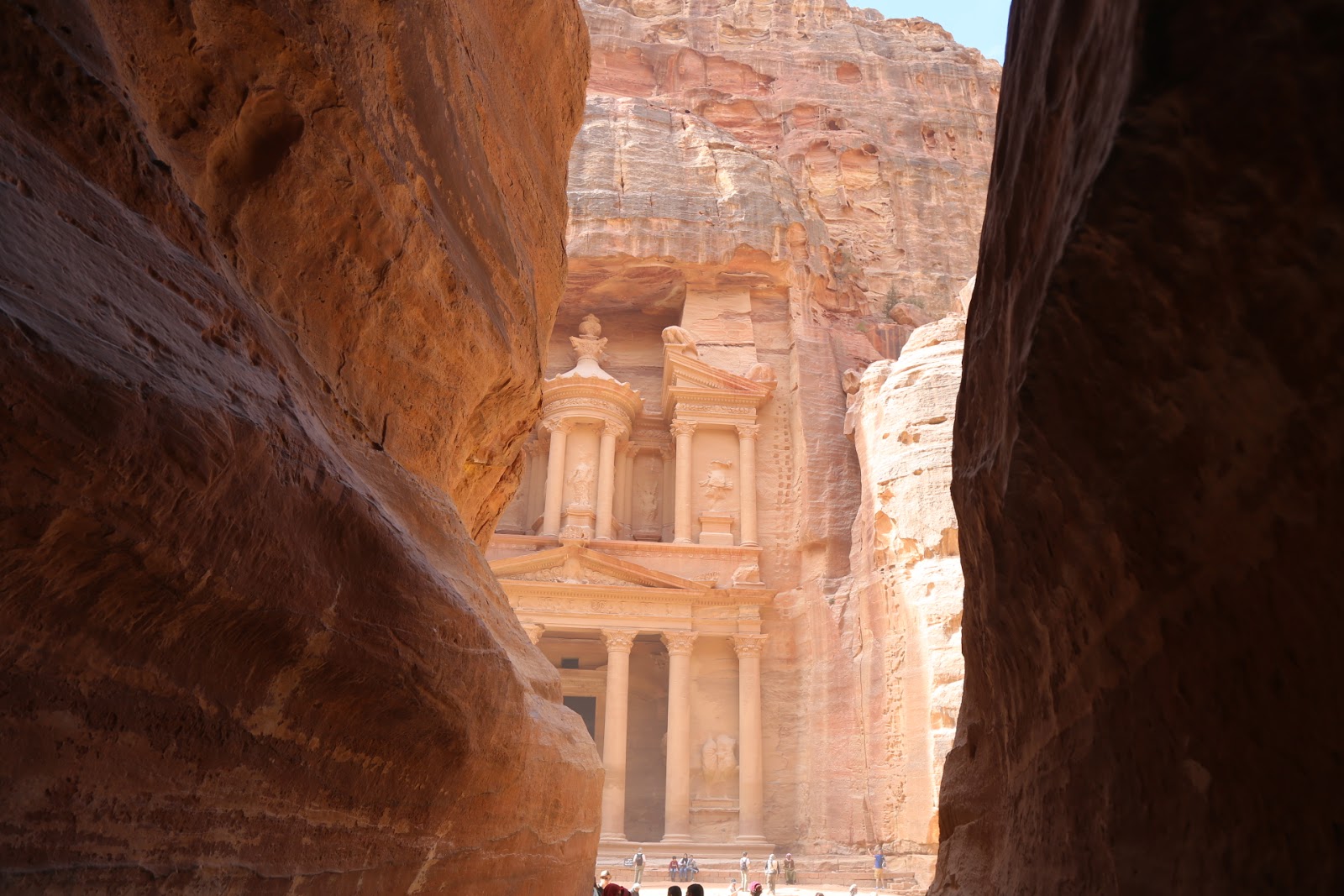 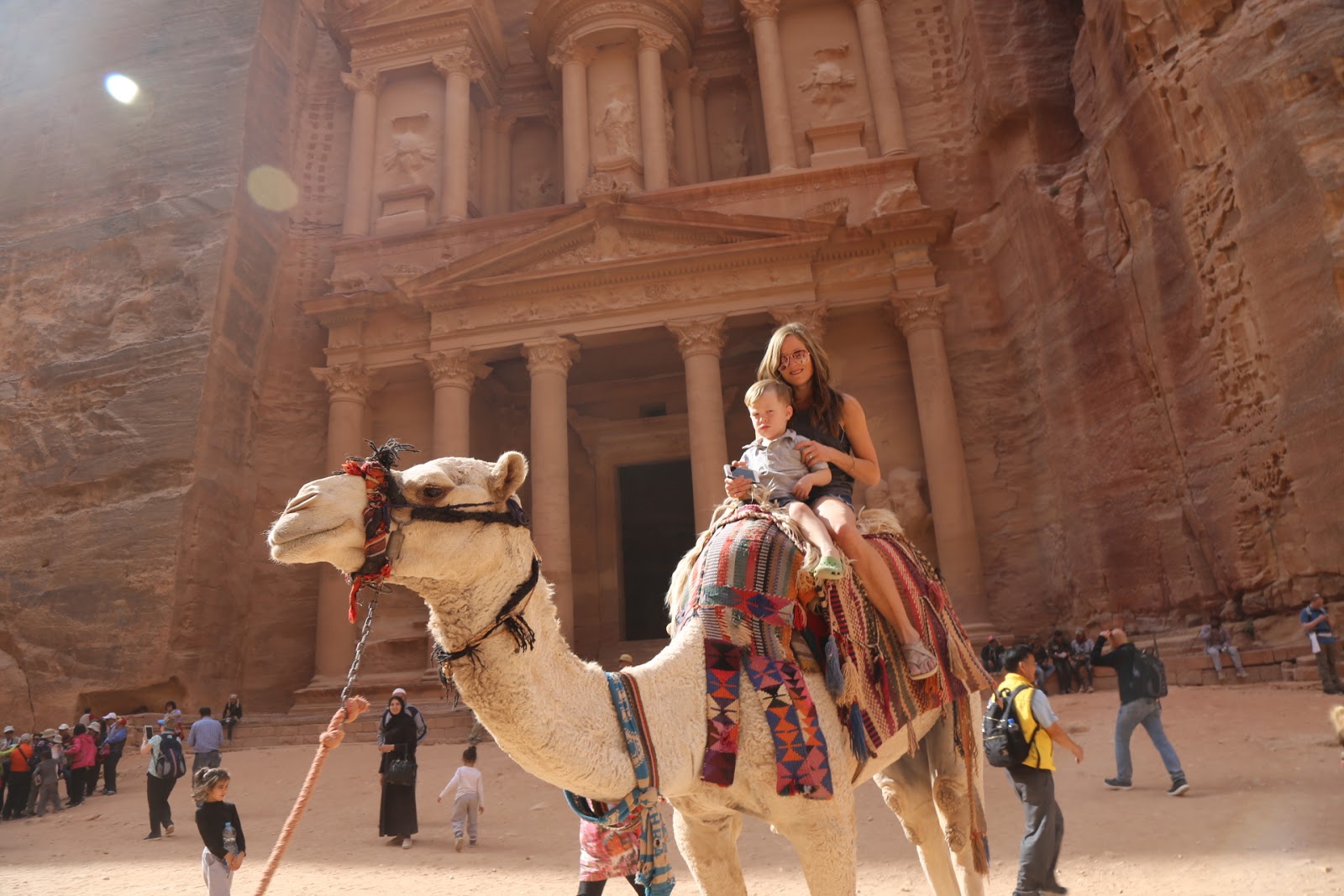 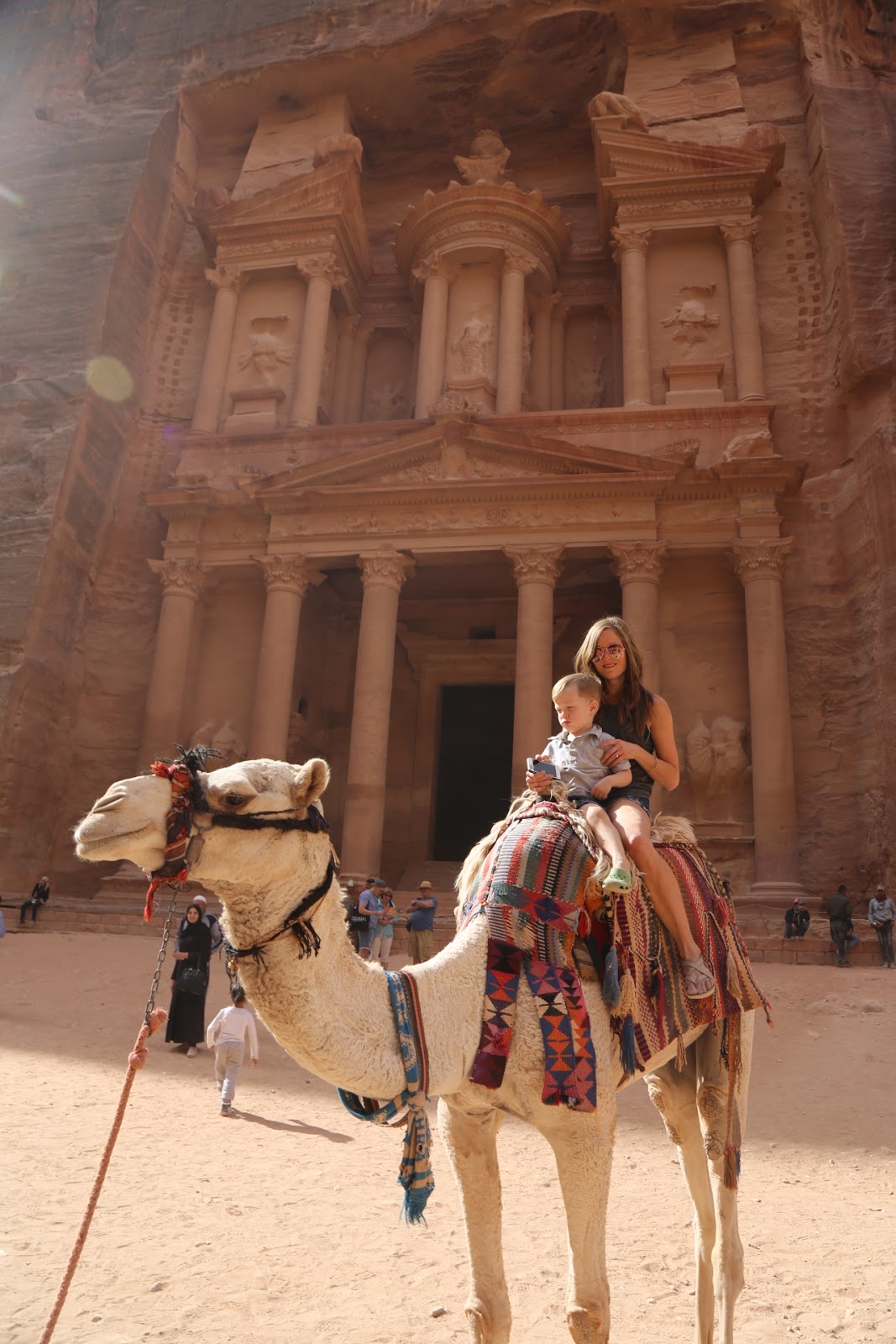 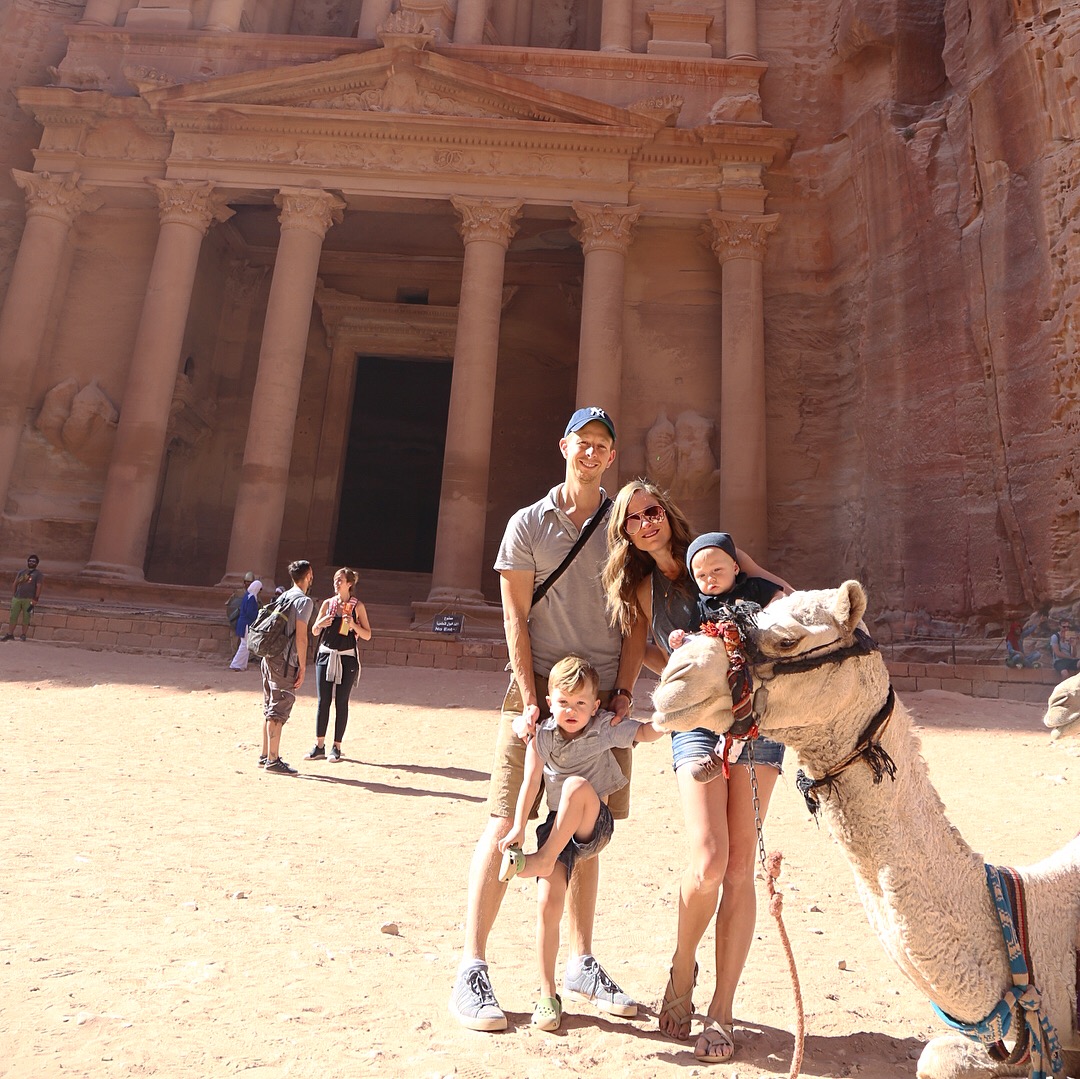 As I said before, we ended up leaving our stroller to do the next section of the old city because there were a lot of stairs, so we just left it at a little shop and I carried Christopher around in the baby bjorn.  There was SO much to explore, way more than I would have expected.  Unfortunately, because we had the boys and we knew they would only last so long (and it was getting fairly hot), we ended up not seeing everything, but both Matt and I were okay with what we did see and now we will just have to return when they are older! ;-) 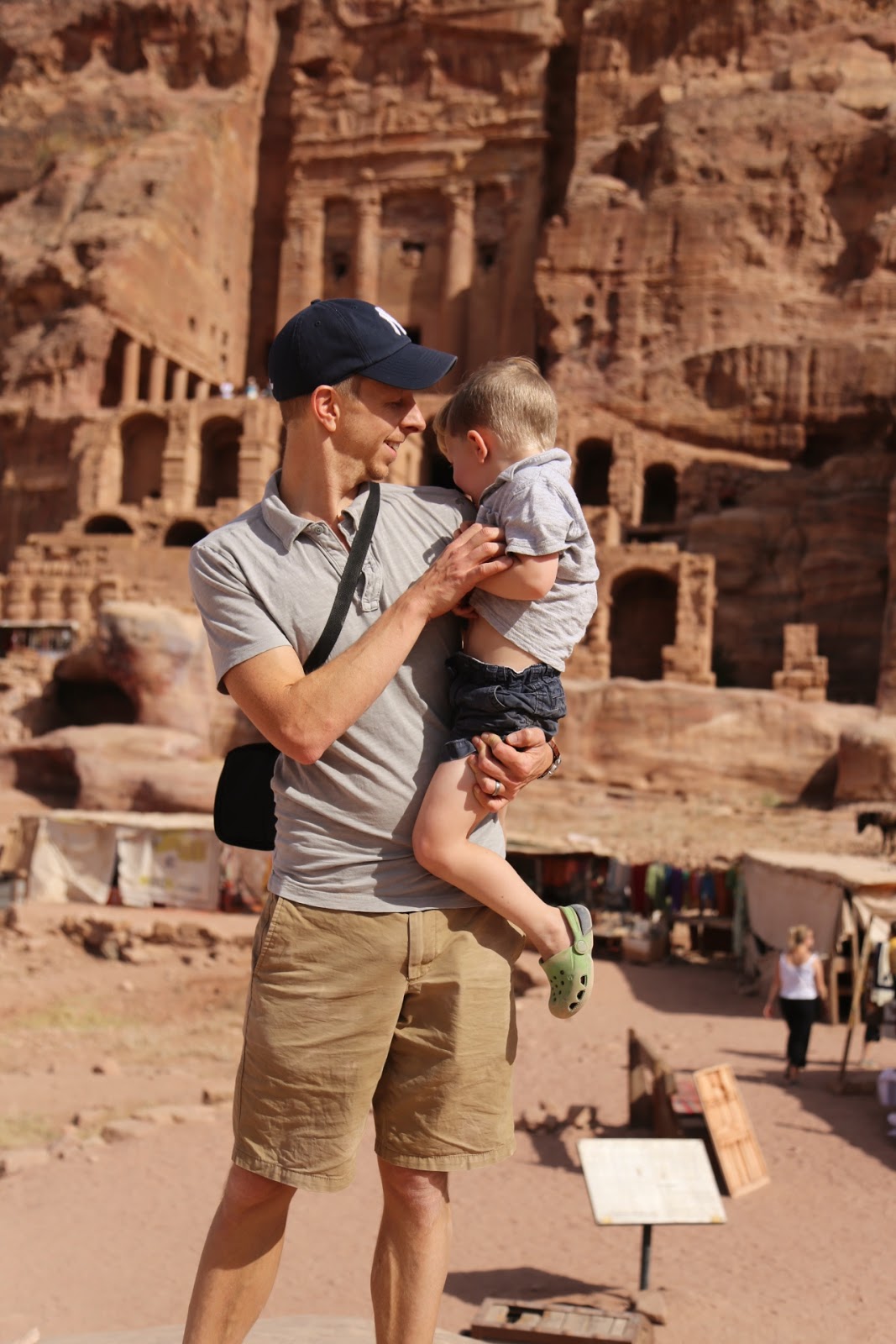 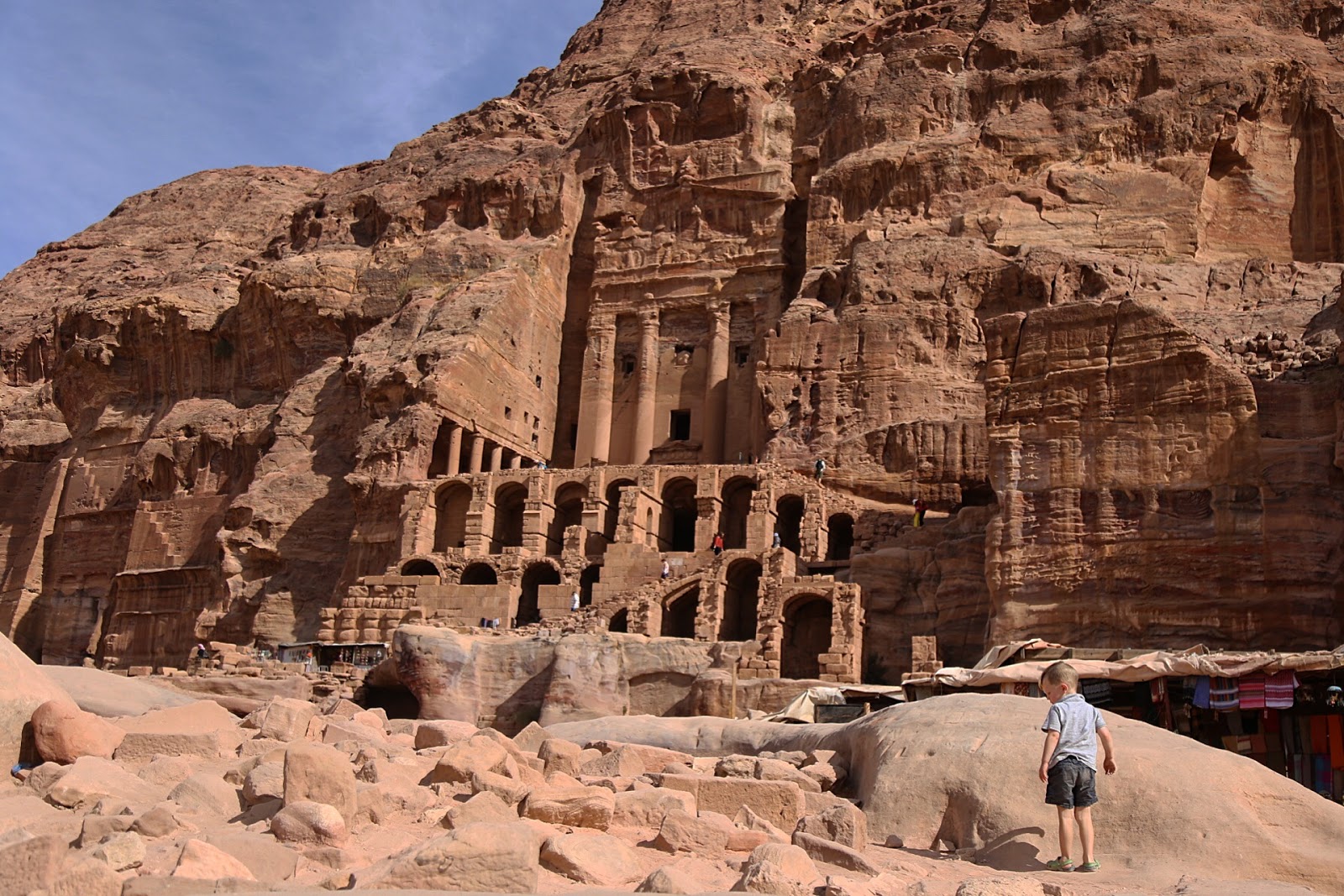 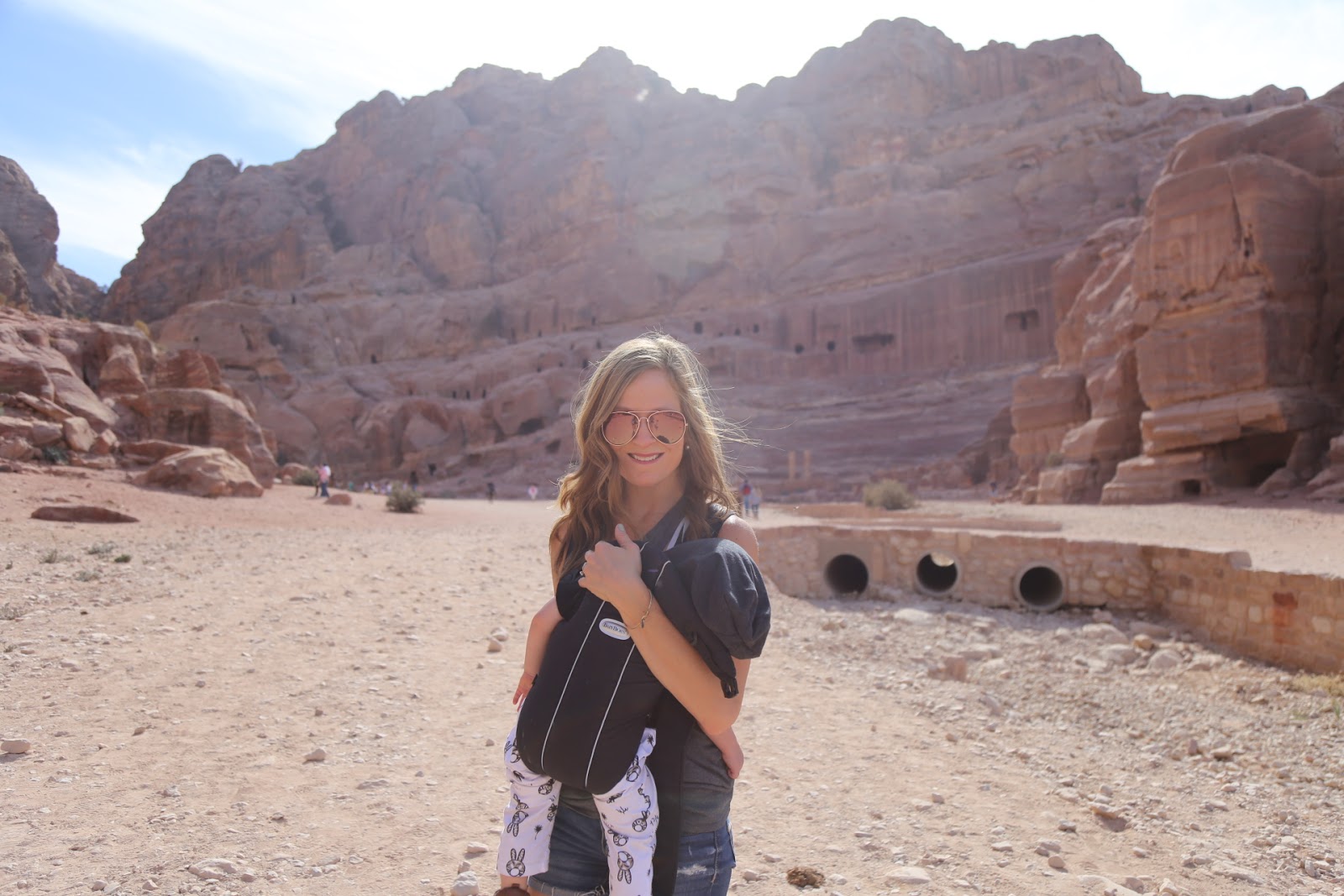 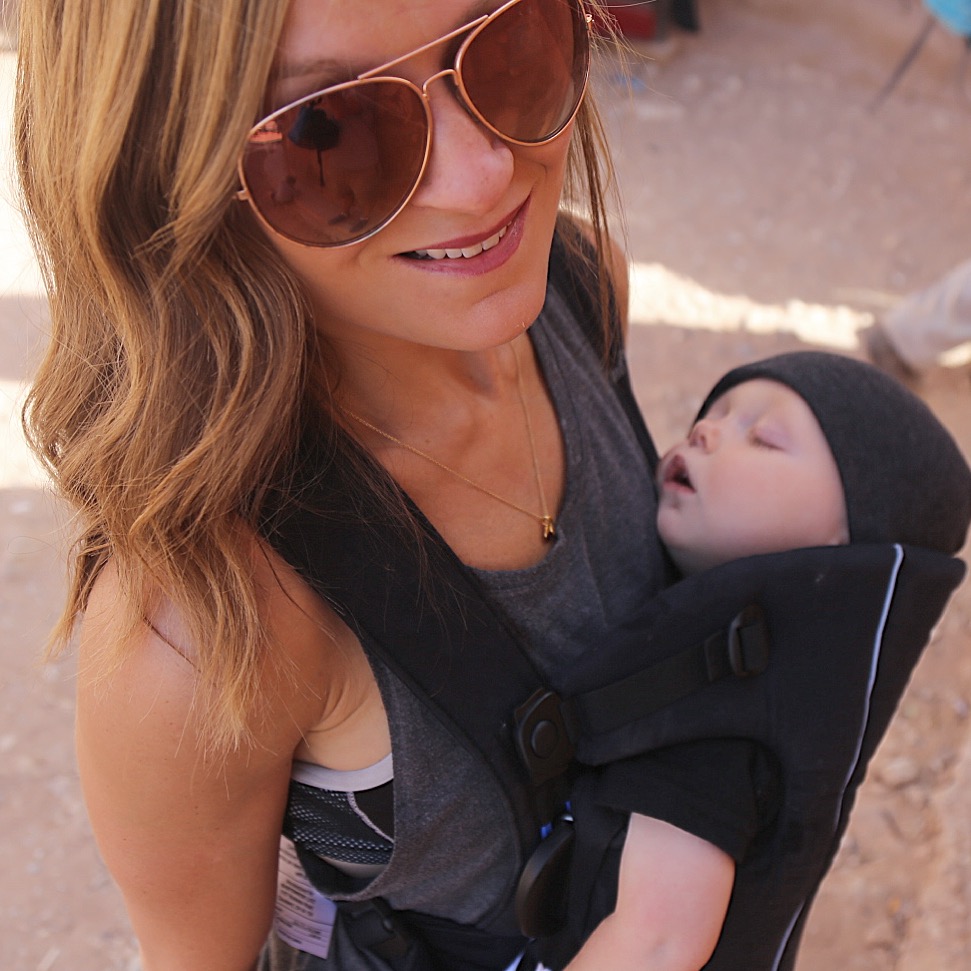 Learning in Petra: Our "Homeschooling" Field Trip
As a parent, our day in Petra was magical.  I joke that we aren't sending Dylan (3 years) to preschool but that I am homeschooling him; which basically means I let him learn from play all day.  But we really DID learn a lot that day in Petra and Dylan was soaking it all in.  We explored old caves and pretended that it was our home and that each area was our bedrooms.  We used our imagination and played with little rocks he found in the sand and pretended as if they were little people (a bad guys vs good guys game he made up).  I LOVE seeing my little guy use his imagination with anything around us... who says kids need a ton of store bought plastic toys to have fun anyway!

Overall we probably only spent 3-4 hours altogether in Petra, but it was well worth it and was definitely my favorite day the entire trip!  I would highly recommend Petra to anyone who asks!! :)