I’m obsessed with Nara and I really wish we had more time to explore this beautiful city; we were literally there for 18 hours, and 8 of those we were sleeping.   Most people visit Nara as a day trip, but we decided to spend the night because it was on our way back to Tokyo from Kyoto. 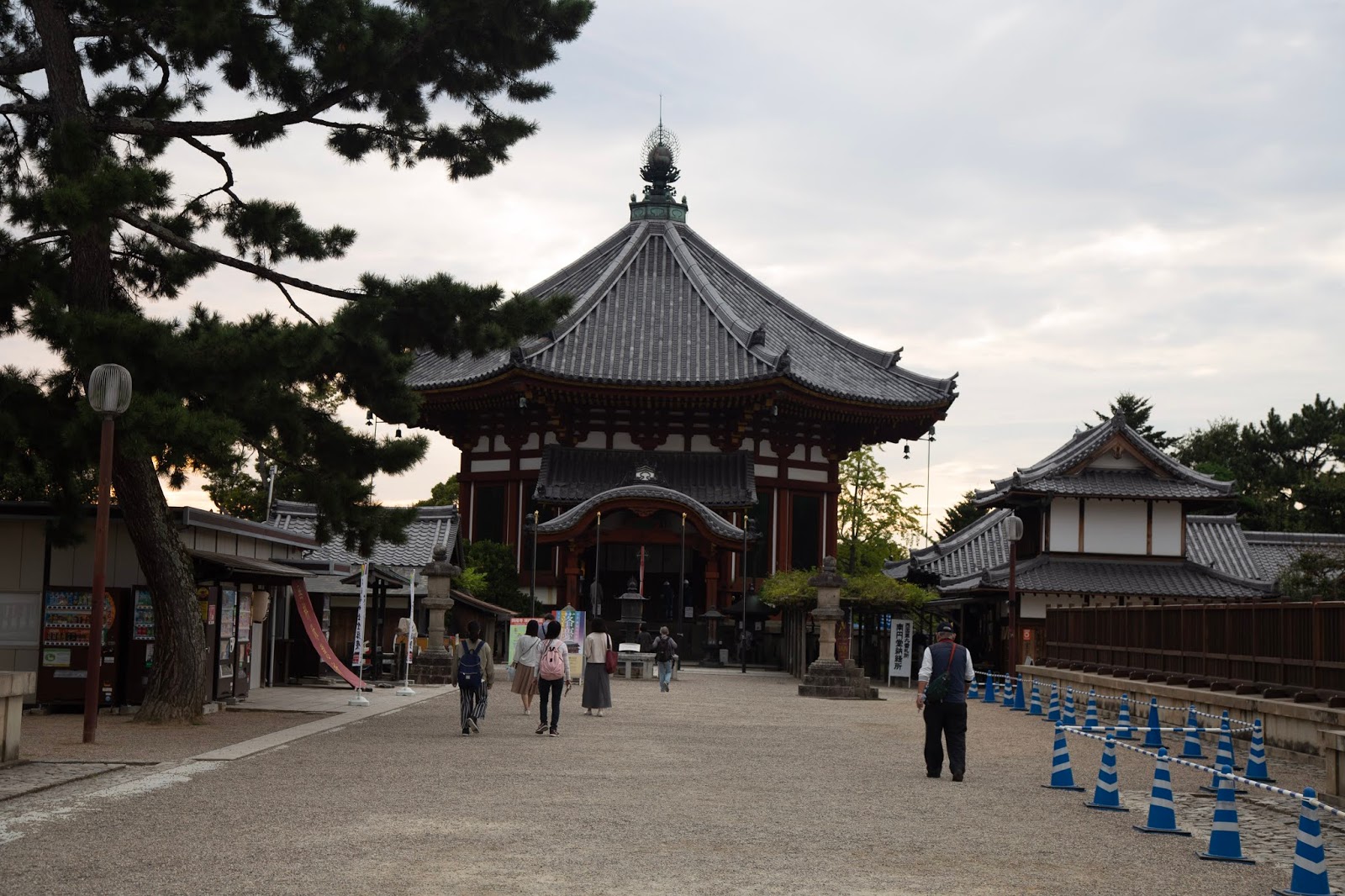 Renting a car vs. Riding the Bullet Train
We rented a car, and we felt that it would be nice to spend the night in some fun cities along the way.  And since we could store our suitcases in our rented car, luggage wasn’t an issue.  It's especially nice to rent a car when you arrive in a city early and can’t check into the hotel yet.  You always have a safe place to store everything.   However, If you don’t have kids, I would definitely recommend using the train system over renting a car.  The bullet train from Tokyo to Kyoto is only 2 hours, but it takes 7 hours to drive.  We used to always travel by train, even when we just had Dylan, and we traveled by train during our Netherlands trip last spring; but we are finding that as our kids are getting bigger, we have accumulated more luggage to tote around… and I’m not going to lie, it is soooo much more relaxing to have the boys contained in car seats for a scenic drive rather than chasing them running up and down the train cars. Lol!  We really enjoyed driving around Japan and the views were spectacular.  It was also nice to go at our own pace and be able to stop along the way to pick up snacks and stretch our legs- and not have to worry about any time tables, like we would have catching the train on time with two little kids (and a pregnant mother, lol).

Since we didn’t have much time when we arrived in Nara we made sure to do our must-sees right away.  So Matt parked the car at our hotel, quick checked in while the boys and I waited in the car, and then we quickly left, leaving our luggage in the car until we would head back to the hotel for the night.

Kofuku-ji:
Our first stop was Kofuku-ji, which we really wanted to see because if you’ve ever been to Disney World, you would see a replica of the pagoda in Epcot Center.  It’s pretty amazing to see these structures with such unique Japanese architecture that dates back to the 7th century!  We didn’t go in any of the other buildings or do much other than take a picture, but I’m sure it would have been fun to explore.  We try to be realistic as to what we can or can't do based on the ages of our kids. 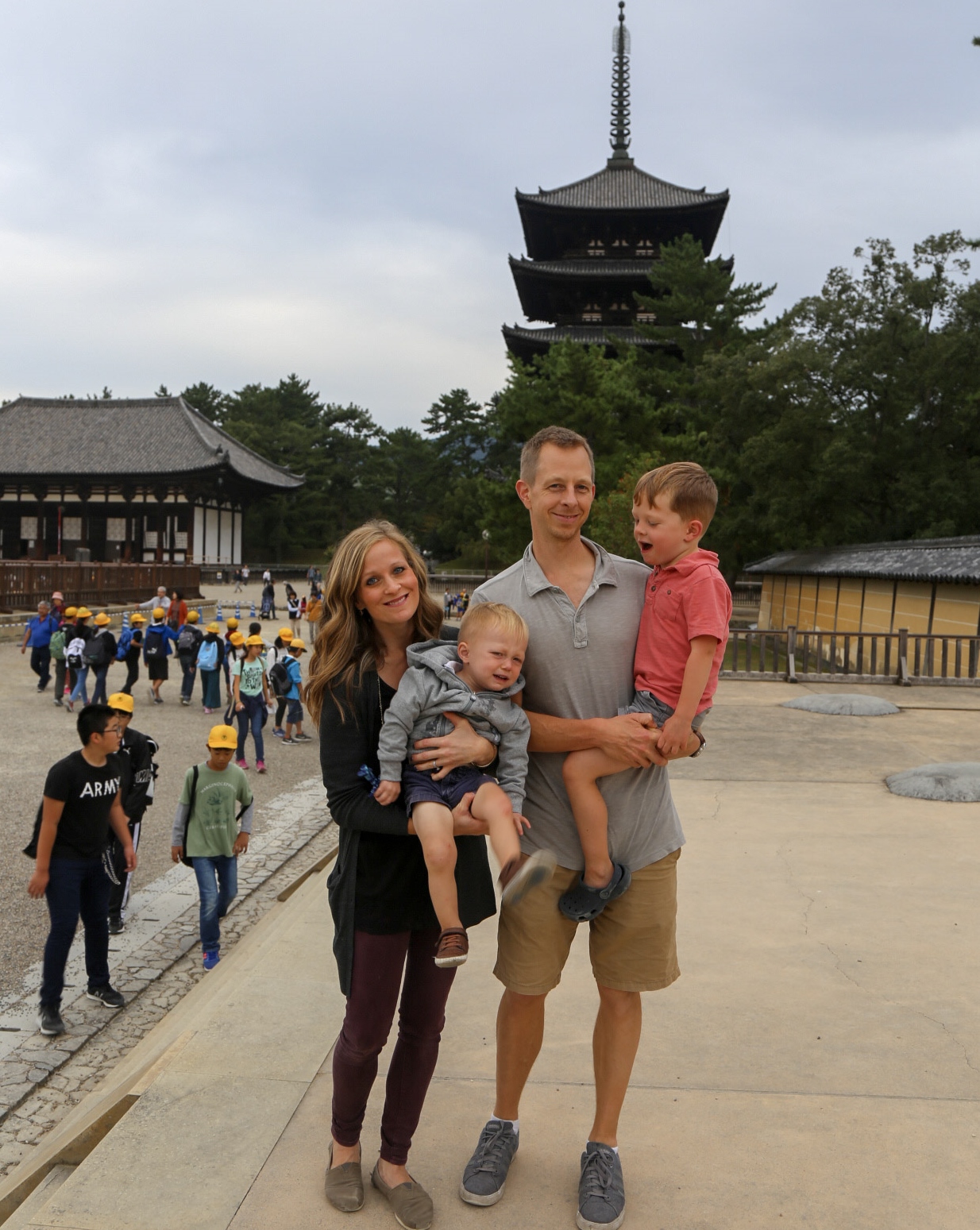 Feeding Deer in Nara:
Next, we walked just a few blocks up to a huge city park where there are tamed wild deer that will come right up next to you looking for food!  For some reason I have always loved deer and I remember, as a little girl, getting so excited finding deer in a meadow at dusk when we were driving along the country side.  I couldn’t wait to see the deer in Nara, and boy, did they live up to and exceed every expectation I had about them!   As soon as we walked into the park, a baby deer approached us, let Matt pet her, and then sniffed our hands for food.  We were able to find an old McDonalds French fry and half eaten chicken McNugget in the stroller that Dylan offered her.  Almost immediately we were approached by several other deer, some a little more aggressive than the sweet one we first met.   Soon they were all inspecting our stroller for food, pulling out maps from the bottom compartment and eating them!  LOL!  We quickly went to a little shop to pick up “deer cakes” to feed them and it was so much fun!!!  The boys did great, especially Dylan, and it was so cute to hear him talk and scold the deer like he would our dog.  J 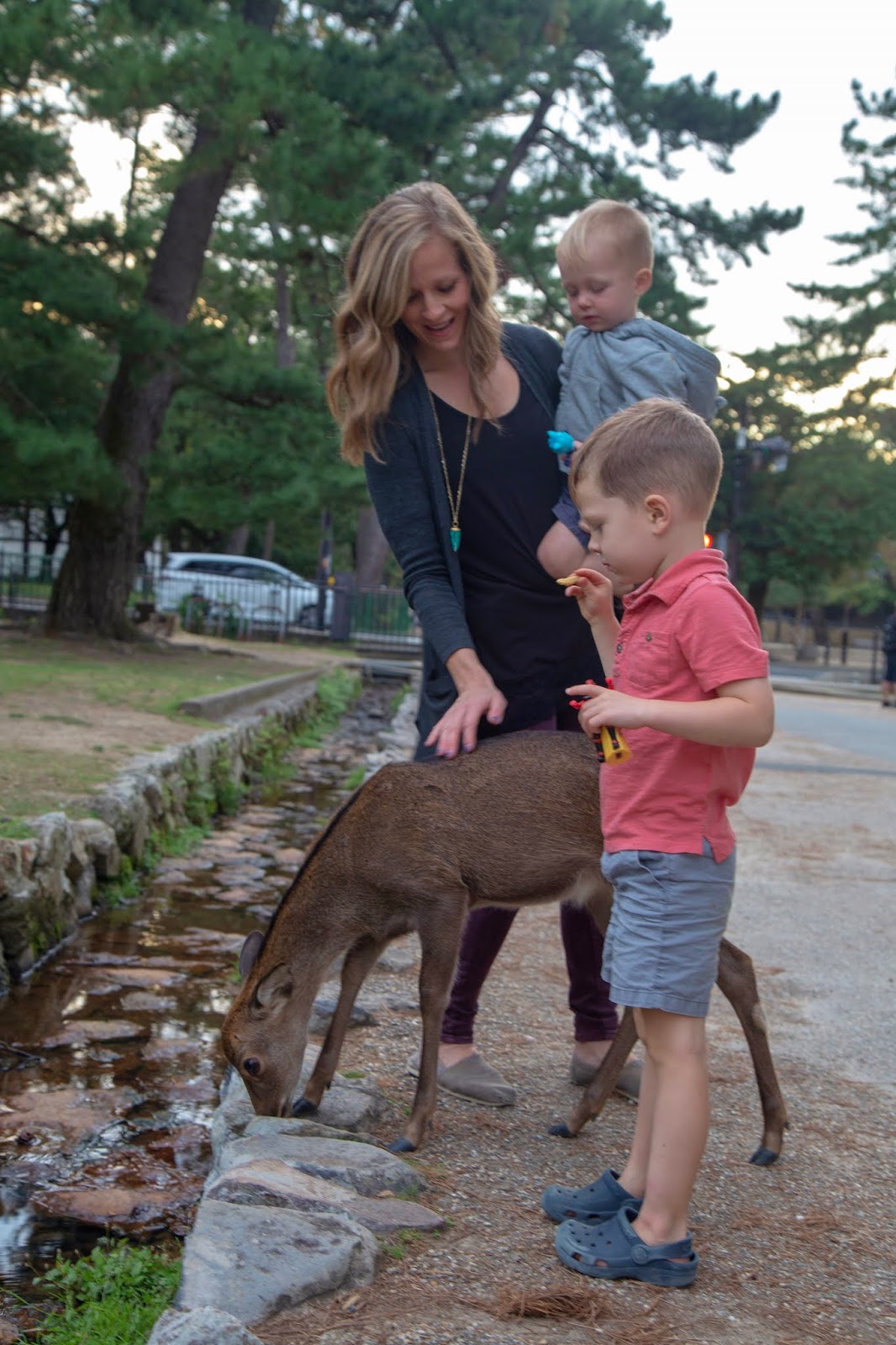 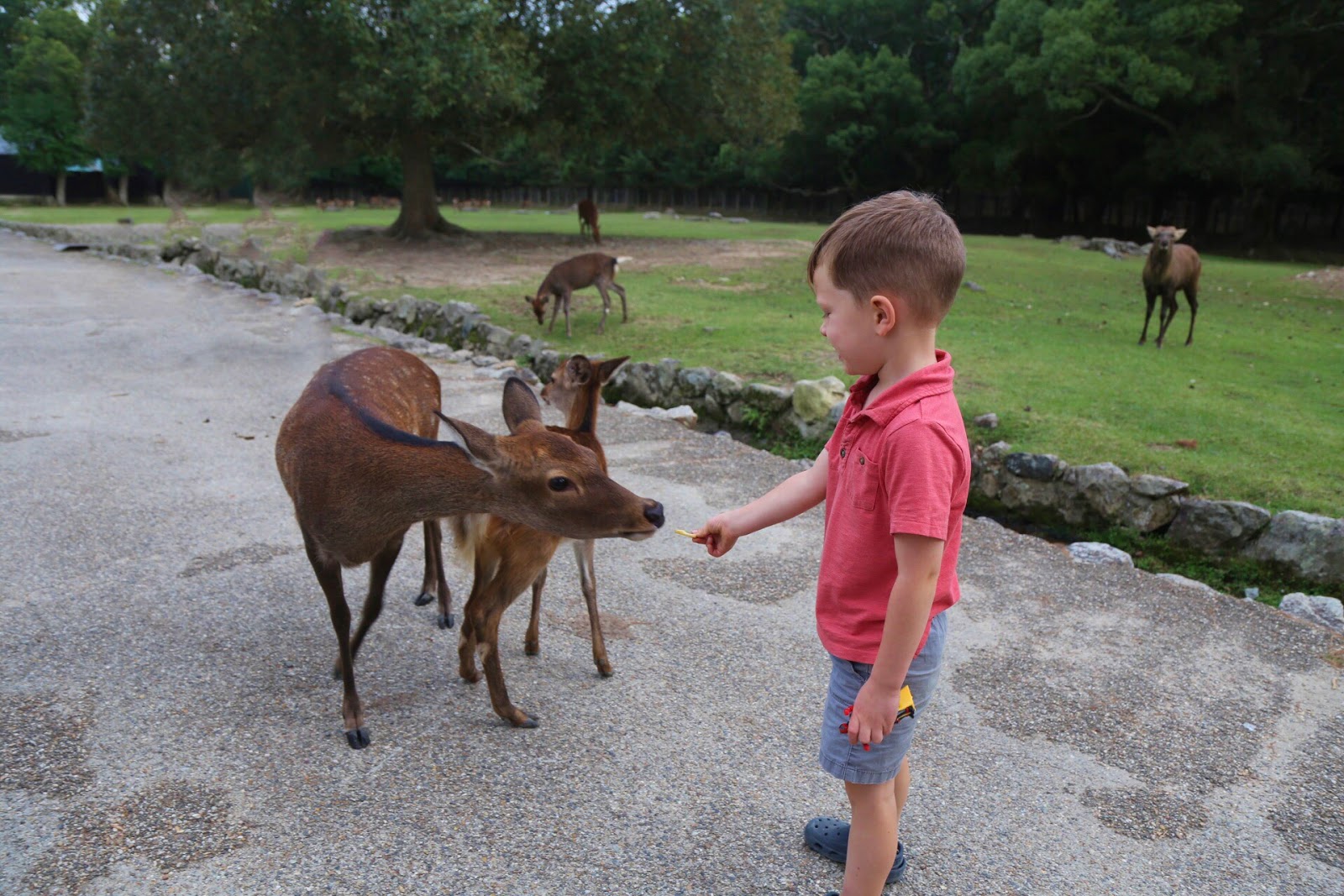 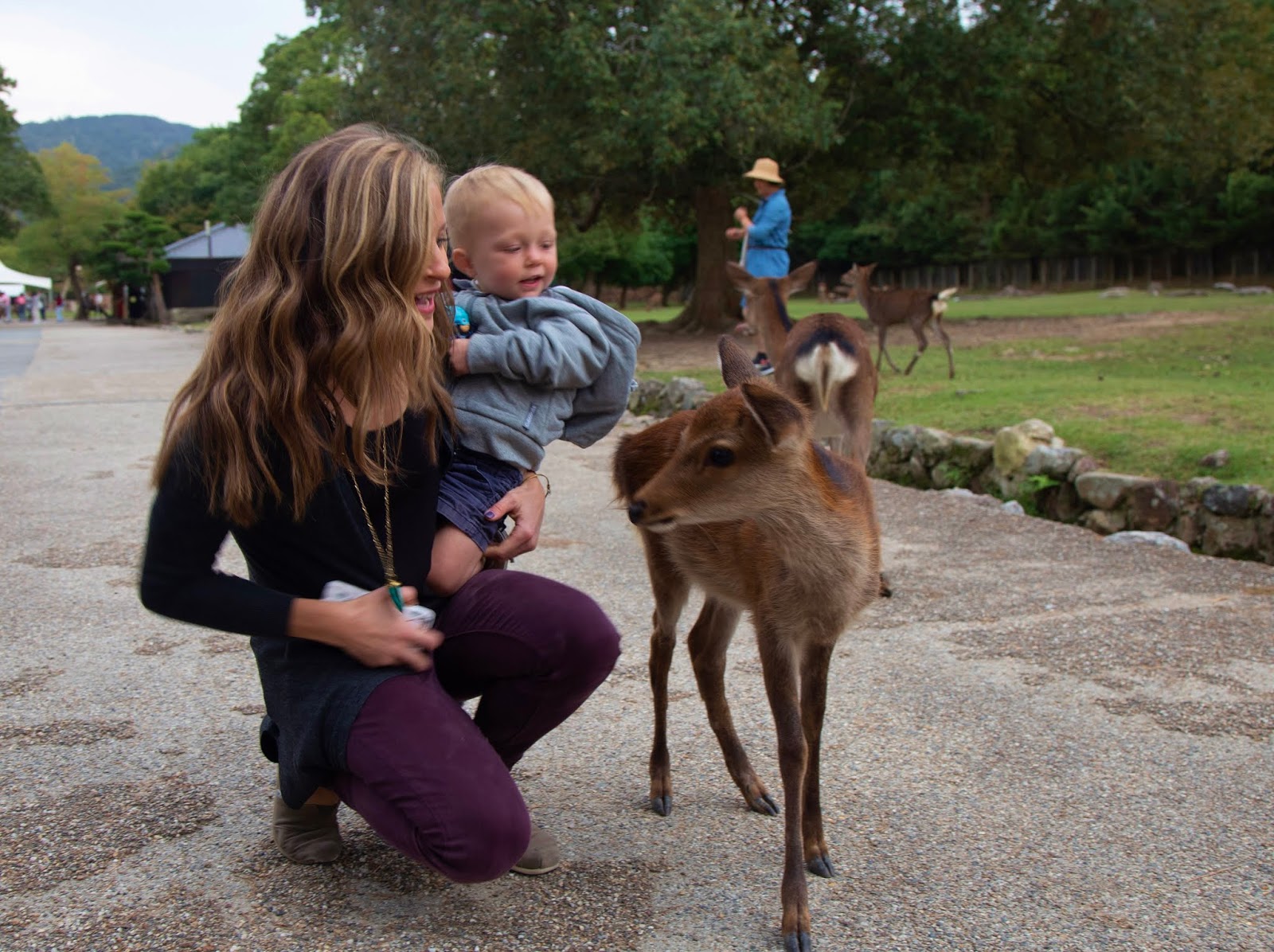 Buddha Statue:
After the deer experience, we walked over to Todai-ji, the Big Buddha statue called Daibutsu, which Nara is most popularly known for and the number 1 tourist attraction in the city.  The first structure you approach is a big wooden gateway that you can walk through with two statues seated on either side staring at each other.   The statues are Japanese Nio guardians, sculpted in the 13th century, and known to be the finest wooden statues in all of Japan, if not the world, according to the Lonely Planet Guide Book.  The Big Buddha, which you find in the main structure, is one of the largest bronze Buddhas and is housed in the largest wooden building in the world. 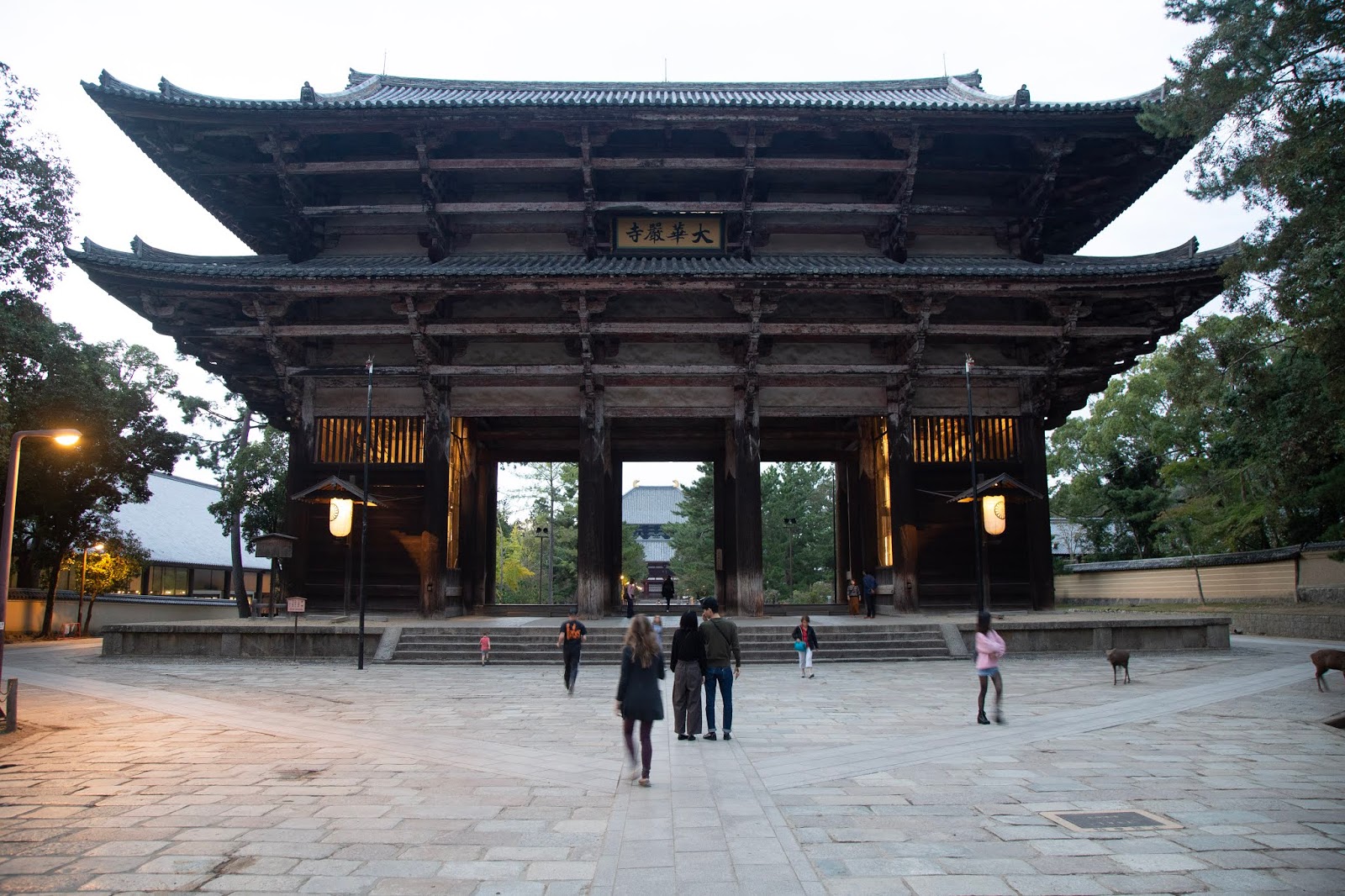 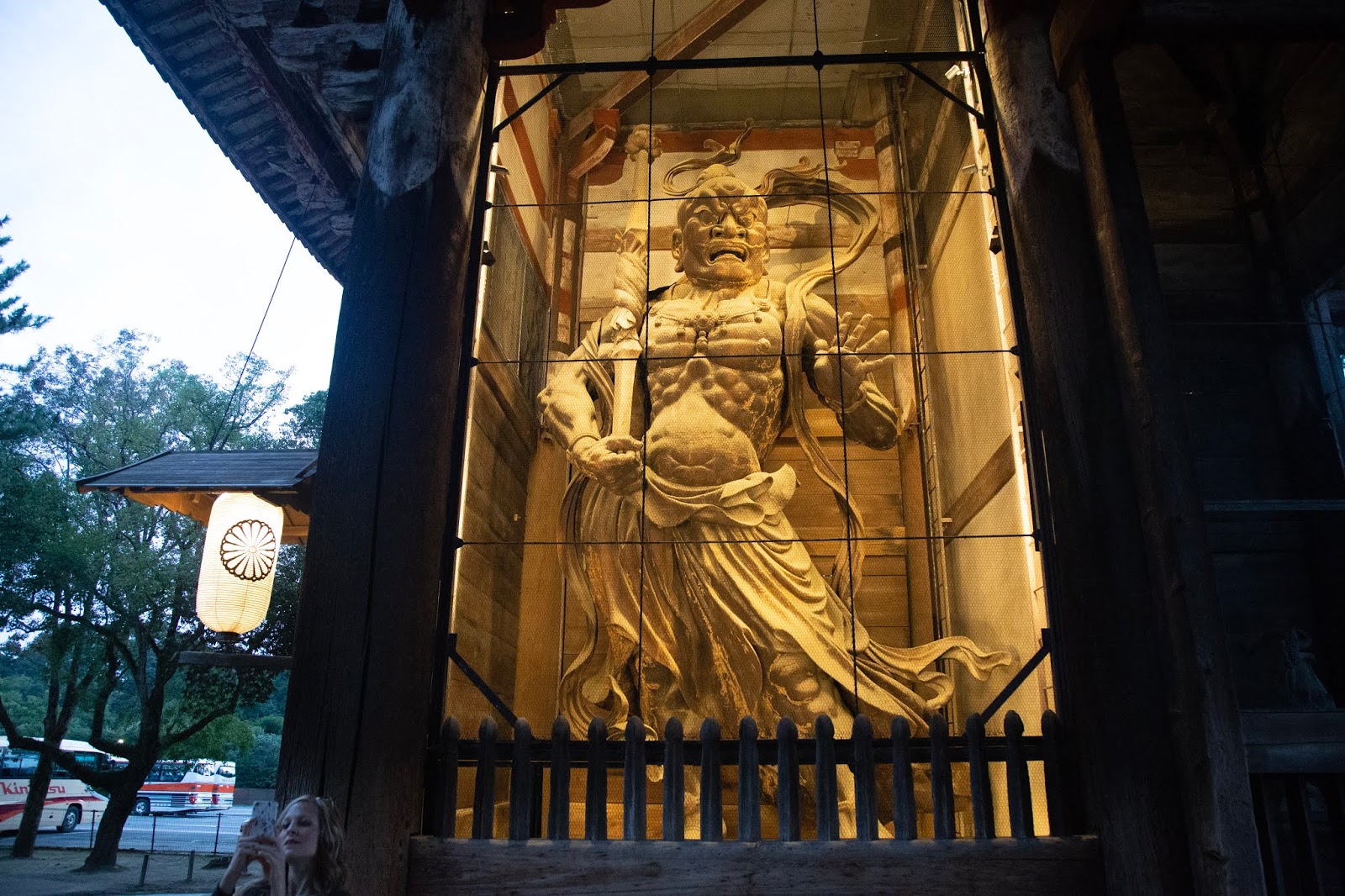 Food:
That night, we ate dinner at one of those sushi go round restaurants.  Basically, you sit at a bar and watch different food options go around on a conveyor belt.  You grab whatever looks good and eat!  Each plate is a different color which represents the price of your food so the waitress knows what to charge you.  It was definitely easy to grab a few impulse plates because everything looked sooo yummy! 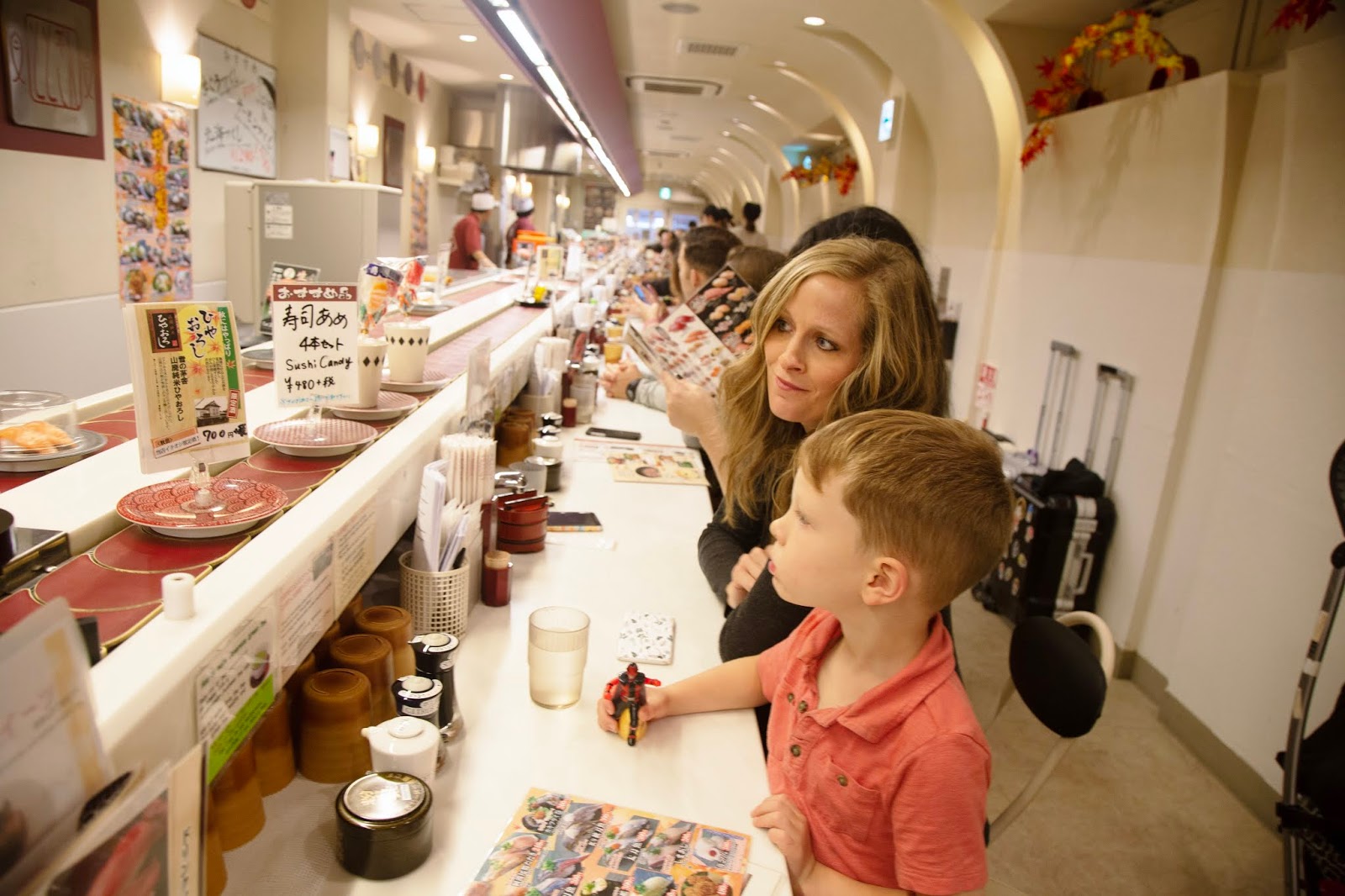 Hotel:
That night we arrived back at our hotel.  Matt was a little frugal about this one, but it sounded cool because it was super Japanese and he thought it would be fun.  We laughed so hard when we walked into our room because it was TINY.  Possibly smaller than a room you would stay in on a cruise ship.  The bathroom was my favorite- the same knob you used to turn on the water for the sink would also turn on the water for the shower.  However inexpensive the room was, they still supplied us with tooth brushes and tooth paste, something every hotel offered us, as well as slippers and Japanese style robes to wear.  Of course, there was no room for a second bed or even a pack’n’play.  However we were able to fit Christopher’s Pea-Pod Travel Tent by the front door and there was a pull out mat under the bed and extra sheets for Dylan to sleep on the floor.  I have to say, I really liked staying in our little room; we’ve stayed at some really nice hotels in the past, but it was fun to think our family is flexible enough to sleep wherever and we don’t have to be picky travelers.  Breakfast was included in our stay and I appreciated both American and Japanese style options. The setting was pretty relaxed there so when the boys broke out into song together during the meal, we didn’t feel too bad about it, like we would have if we were staying at the Ritz! Lol!

I would definitely recommend stopping in Nara when you travel to Japan!  There was something about the area that just left me in a really good mood and it was probably one of my favorite places to visit in all of Japan!
Labels: Asia